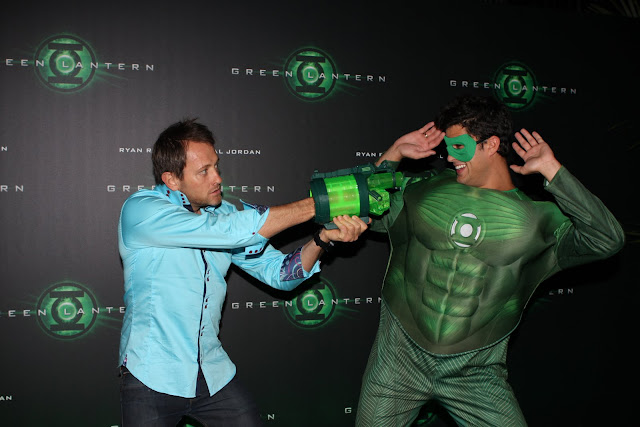 Mind you, the competition in the superhero genre has been pretty stiff, with Captain America: The First Avenger, X-Men: First Class and Thor, but the general feeling is that the movie should have been considerably better - especially considering a budget of around $200 million.
The blurb goes something like this...A test pilot is granted a mystical green ring that bestows him with other worldly powers, as well as membership into an intergalactic squadron tasked with keeping peace within the universe.
Green Lantern is almost certain to live on via the big screen, but likely not with the same director.
Despite the big-budget superhero movie’s rather disappointing box office performance so far, Warner Bros. executives still want to find a way to make a sequel work. Bringing superheroes from its DC Comics unit to the big screen is a top priority for the studio, and executives believe that the problem with "Green Lantern" was in execution, not concept. When quizzed they were happy to share the following:
"We had a decent opening so we learned there is an audience,” said Warner Bros. film group President Jeff Robinov, pointing to the film’s box office debut of $53 million. “To go forward we need to make it a little edgier and darker with more emphasis on action…. And we have to find a way to balance the time the movie spends in space versus on Earth."
After its luke warm opening, “Green Lantern” went green at the U.S box office, ending up with only $114 million. Its overseas performance in important countries such as Great Britain, Germany and Russia has also been weak. Australia isn't looking crash hot we must report, but Aussies are big super hero film buffs, so we will know soon enough.
No, before you ask us, lead actor Ryan Reynolds will not be doing the red carpet premier in Australia, but I'll show up anyway to take some snaps and to (hopefully) enjoy the movie, but I know I will have my work cut cut out for me.
The secret to enjoying this movie is to enjoy the superhero genre, and not to expect too much. Excelsior (not). DC Comics or even Marvel Entertainment would struggle to get this into a thumbs up category, but DC Comics is going to do a sequel we hear - in order to attempt to at least break even.
Our friends at Box Office Mojo asked the well versed readers a question, and the results speak for themselves...
Do you want to see a sequel to 'Green Lantern?'
41.5%  No.
33.6%  Yes.
24.8%  I don't care.
Future Of DC Superhero Flicks...
The future is already speculative, and this is especially true for DC superhero movies. We've got "The Dark Knight Rises,” the final chapter of director Christopher Nolan’s Batman trilogy, coming out next season, followed by Zack Snyder’s Superman reboot, "Man of Steel," circa June 2013. Later that year or in 2014, Warner could very well move forward with a second Green Lantern or Flash movie. Robinov said the studio has "a solid script". The exec also remains keen in bringing DC heroes together for a "Justice League" movie.
We like his ambition, but let's get the basics right at DC first, before unleashing the best you may have to offer.
Green Lantern - slightly a green light, over a red light. See if for yourself and you be the judge... or Justice League, and make your vote count.
The green flick enjoys its Sydney, Australia premiere tonight.
The Players...
Director: Martin Campbell
Writer: Greg Berlanti
Actors:            Ryan Reynolds, Blake Lively, Peter Sarsgaard, Mark Strong, Angela Bassett, Tim Robbins
Producer: Greg Berlanti
Websites
Green Lantern
http://greenlanternmovie.warnerbros.com
DC Comics
http://www.dccomics.com
Warner Bros.
http://www.warnerbros.com
Event Cinemas
http://www.eventcinemas.com.au
Eva Rinaldi Photography Flickr
http://www.flickr.com/evarinaldiphotography
Eva Rinaldi Photography
http://www.evarinaldi.com
Posted by Eva Rinaldi at Tuesday, August 09, 2011