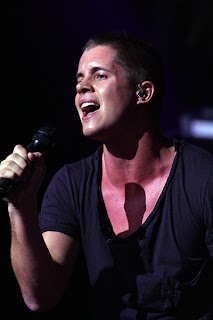 Friday 27 April 2012 – Live Nation are thrilled to announce that one of the hottest stars right now,
Johnny Ruffo, has been confirmed as the special guest on the upcoming New Kids On The Block and
Backstreet Boys Australian tour. So hot that Johnny has just been named as a runner-up in Cleo’s
“Bachelor of the Year” competition!

It’s been a massive 12 months for Johnny, who was a finalist in The X-Factor. He also went on the road
with One Direction and is now showing Australia his moves on Dancing With The Stars.
Johnny, 23, is also getting set to launch his recording career with Sony Music.
“Some days I pinch myself,” Johnny said. “I’ve just finished the One Direction tour, now I’m going on the
road with NKOTBSB. I can’t wait.”

New Kids On The Block and Backstreet Boys will arrive in Australia next month performing in
Melbourne, Adelaide, Brisbane, Sydney and Perth. Tickets available now from Ticketek.
“If our fans want us down under, we'll go down under,” said New Kids’ Donnie Wahlberg. “Our
international fans have been flying to see us stateside for years, so now we are bringing the show to
them. Get ready Australia, we are coming to you!”

The Australian leg will bring the historic NKOTBSB tour for a limited six-show run, giving fans across the
globe chances to catch their favorite groups on one stage. Fans in Australia can finally see what North
American Press hailed as “One of the hottest tickets of the summer,” as described by OK! Magazine.
“Each tune was performed with the same energy, crotch-grabbing, and hip-thrusting that turned these
groups into teens sensations years ago. NKOTBSB may well be the tastiest musical mouthful of the
summer,” raved Entertainment Weekly.

NKOTBSB first shocked and delighted fans when they took to the stage together for a medley at the sold
out NKOTB Radio City Music Hall show. The two groups wowed audiences again in their first joint
televised performance at the American Music Awards in November 2010 and have toured consistently
through 2011 since coming together.

With more than 200 million albums sold between both bands, and smash hit after smash hit, these two
pop sensations have dominated the music scene for more than three decades. Aiming to please, these
guys are giving concert goers and diehard fans everywhere the ultimate “night out” experience.

NEW KIDS ON THE BLOCK sold more than 80 million albums worldwide – including back-to-back
international #1 songs, 1988’s Hangin’ Tough and 1990’s Step By Step – and a series of crossover
smash R&B, pop hits like You Got It (The Right Stuff), Cover Girl, Didn’t I (Blow Your Mind This Time),
Hangin’ Tough, I’ll Be Loving You, Step By Step and Tonight. The group shattered concert box office
records playing an estimated 200 concerts a year in sold out stadiums throughout the world. They still
hold many of these records to date. They were Forbes highest paid entertainers of 1990, beating out
Michael Jackson and Madonna. The band boasted an extensive and highly profitable merchandise line
which included everything from lunch boxes and sleeping bags to comic books, marbles and dolls. 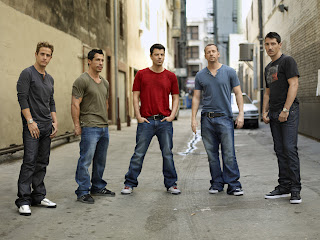 NEW KIDS ON THE BLOCK AND BACKSTREET BOYS
Posted by Eva Rinaldi at Friday, April 27, 2012