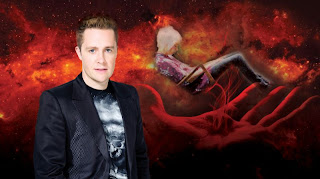 Live Nation is thrilled to announce one of the world’s leading mentalists, brain hacker and hypnotist - Keith Barry - who is in Australia for the first time this week, will return for his debut national Australian tour this August.
Audiences should prepare for a riveting, mind-boggling one-man show, comprising of brain trickery, hypnotism and seemingly unbelievable and unexplainable mentalist activity not seen before in Australia.
Keith, the dashingly handsome Irishman, is enjoying time in Sydney and Melbourne this week to promote his upcoming tour, exposing and educating diverse audiences to his incredible talents throughout Australia and New Zealand.
Keith Barry is looking forward to getting into the heads of his Australian audiences!
Recent TV appearances on US chat shows ‘Ellen’ and ‘The Late Show’, a residency in Las Vegas and his trickery with A-listers - such as Bob Geldof, Charlize Theron, Samuel L Jackson, Lindsay Lohan, The Pussycat Dolls’ Nicole Scherzinger and Elijah Wood - becoming youtube sensations, Barry has certainly made a name for himself in North America and the UK, and his popularity continues to soar worldwide.
In 2009 Keith was awarded the prestigious ‘Merlin Award’, presented to those magicians who have achieved the highest level in their craft both on the national and international stage. Akin to an Oscar, previous recipients include the likes of David Copperfield, Sigfried & Roy, Penn & Teller and Criss Angel, putting Keith in impressive company.
Keith’s UK shows have also enjoyed massive success with his 2011 stage show ‘8 Deadly Sins’ officially the most successful solo act ever to play at Dublin’s Olympia Theatre, beating his own 2010 record.
In the US a five-week residency was met with rave reviews, resulting in the Las Vegas Review Journal awarding him ‘Best Magician in Las Vegas’.
Barry has also enjoyed great success on TV with his very own Discovery Channel show, ‘Deception with Keith Barry’.
Be amongst the first in Australia to fall under the spell of Keith Barry live – but only if you dare!