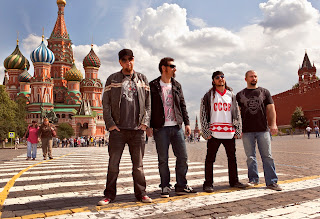 System Of A Down To Do SoundWave Festival Plus Sydney And Melbourne
by Eva Rinaldi
24/11/2011
System Of A Down are coming to Australia to headline SoundWave 2012, and will also be doing shows in Sydney and Melbourne.
If you haven't heard of them until now, don't worry - you will be hearing a lot more about these world calibre rockers.
I think that System Of A Down will help ensure that the 2012 SoundWave Festival will be a success, and that the Sydney and Melbourne shows are doing to rock big time. Expect to hear lots of these guys on most modern music radio stations worth their salt salt. They have have been once down, but these days are on the up in a big way.
Who Said What?...
It was 2001’s ‘Toxicity’ that cemented their reputation. With every track tightly coiled, urgent and “cast in layers upon layers of aural intricacy, Toxicity charters new frontiers, yet it’s still grinding rock at its most deafening.” – L.A Weekly
In 2005, against all odds, the completed Mezmerize/Hypnotize project was unleashed and it quickly became impossible to think of it as anything else than one epic piece of work. SYSTEM OF A DOWN delivered, and in doing so have given us one of the great rock double albums of all time….”rarely are albums this thrillingly original”. Q Mag
As the headliners for the 2012 Soundwave Festival, SYSTEM OF A DOWN will be bringing their frantic, frenetic and brutal live assault to Sydney and Melbourne for two headline sideshows only.
Australian Dates:
February 26, 2012 Sydney, Australia Soundwave Festival Buy Tickets February 28, 2012 Sydney, Australia Entertainment Centre On-sale 12/1 February 29, 2012 Melbourne, Australia Rod Laver Arena
SoundWave Festival Venues And Dates
Feb/March 2012 Sat 25 Brisbane, RNA Showgrounds Sun 26 Sydney Showground Fri 2 Melbourne Showgrounds - Sold Out Sat 3 Adelaide, Bonython Park Mon 5 Perth, Claremont Showgrounds