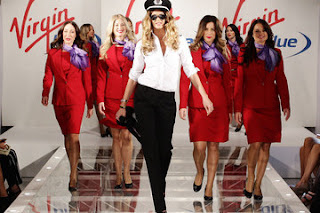 Who doesn't love a woman in uniform?
Australian Supermodel Elle Macpherson aka 'The Body' has just slipped into something more comfortable, or at least that's the wish of Virgin king of the world, Richard Branson and his media savvy team.
The 40 year plus bombshell has just flown in from a Crown Casino, Melbourne stop over, and is strutting her stuff on the catwalk with Virgin hostesses in Sydney sporting a red hot number that is bound to keep passengers and others up all night (and other reaching for the chequebooks and credit cards).
Macpherson has been busy hosting Britain's Next Top Model, but made time to show off the latest Virgin Airline number, designed by season one Project Runway winner Juli Grbac.
It wasn't surprising, the Virgin King insisted that of his real life hosties also got the media rub off from 'The Body', and the powers that be are expecting Virgin Airlines to experience a lift in numbers (plus more mainly positive news media coverage), but just quietly, they expect a couple of knockers also.
Elle was passionate and extremely emotive, appearing to hold back tears, as she spoke on missing her family in Australia and a sick family member. She still looked a million bucks was pure class.
Virgin Blue PR Danielle Keighery spoke on the new uniform making fresh happenings both in the air and on the ground, but assured us that the staff wouldn't change and would continue to be known for their friendliness and fun.
Sex still sells when done right, and few know how to do it better than Elle and RB (who didn't attend due to a ski accident).  Just how much business may have been mixed with pleasure is anyone's guess, but we know that Branson (and Packer friend and associate), Damian Aspinall, the UK gaming and nature entrepreneur, did a series of dates with Elle about a year ago, and Elle is very particular in her brands and men.
I think the matching of Elle and Virgin Airlines might just be quite a match up in heaven. Now all we need is a bit of Michael Buble and wedding bells might sing out in the sky.
Branson and Elle - Virgin's, we don't think so - but the hot red uniform sure lends itself to new beginnings and radiates class, sex, power and style, with just a dash of romance.
What airline will you and yours be travelling on for your next overseas honeymoon. No need to tell us, we will take an educated guess darlings. Virgin continues to add to their world class 'body of work', remaining at the top of their game, despite the sometimes turbulent sector. Oh, did we mention, RB is also a member of the 'Mile High Club', but we are not endorsing you join it via his airline, unless you get a special invitation. 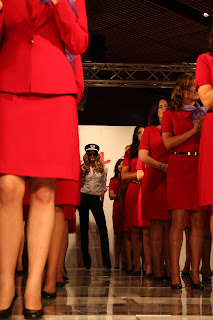 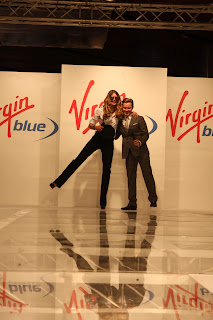 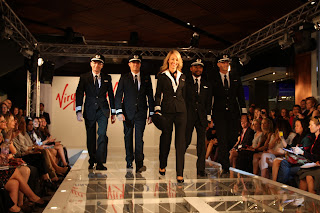 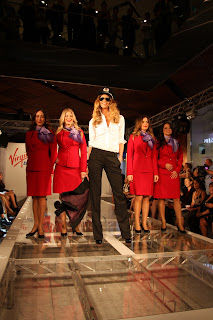 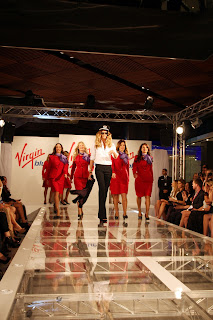 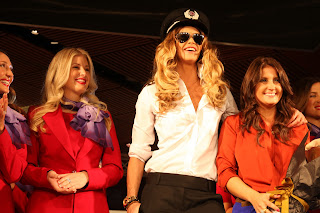