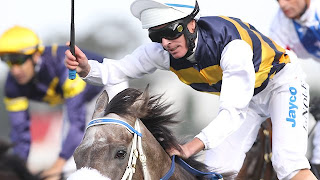 Manighar has led home a trifecta for imported stayers with victory in the $2.25 million BMW at Rosehill on Saturday.

"He might have been born and bred in France but he's a fully-fledged Aussie as far as I'm concerned."

Nolen took the six-year-old to front as the field straightened and the result was never in doubt.

Americain gave his all after being forced to race three-wide for the entire trip.

The 2010 Melbourne Cup winner was under pressure at the 400m but rallied strongly in the final stretch.

Drunken Sailor, raced in the same interests as Manighar, took the minor placing.

Manighar and Drunken Sailor were trained by English conditioner Luca Cumani before finding their way into the stables of Moody and Mike Moroney respectively.

"It's been quite a feat," Nolen said of Manighar's run of form which has also included Group One wins in the Australian Cup and Ranvet Stakes.

"Pete's a marvellous trainer but I think we've been given a true indication of his abilities with what he has been able to do with this horse."

Punters, here's to a great day or racing and stay tuned for more reports from the track.