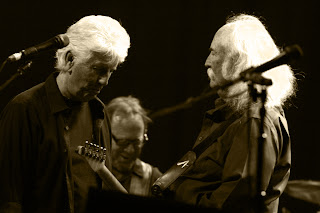 Often referred to as "the voice of a generation", they maintain universal appeal, as demonstrated at a very full Hordern Pavilion in Sydney tonight.

They've been performing together for four decades and have fans stretching across several generations.

The legendary folk rock trio played such beautiful songs such as Marrakesh Express, Wooden Ships, Teach Your Children, Carry On, Our House and Long Time Gone.

John Nash announced to the crowd before the concert that he was sick but would still perform, and you could tell the crowd appreciated his honesty - a trait not always exhibited in the music industry. I thought John sounded fine, and of course he is supported by other world class artists.

They have been around for what seems like forever, but they have hardly missed a beat, and their music is timeless, and seems as relevant today as when they first got together.

Fans - don't miss your only chance to see one of the world's best ever supergroups when they come to your city.

Since forming in 1969, the world's first "supergroup" have delivered countless hits, with their timeless harmonies and melodic folk-rock becoming a cornerstone of today's rock 'n roll. In 2012 CSN will take to the road once again, as they have done on a recurring basis ever since their very first gig together before half a million people at Woodstock more than four decades ago.

Hailed as 'the voice of a generation', fans can look forward to yet another epic performance as they play songs from their amazing catalogue of hits, including Suite: Judy Blue Eyes, Marrakesh Express, Wooden Ships, Teach Your Children, Carry On, Our House, Long Time Gone, as well as the classic anthems of the Woodstock generation - Helpless and Woodstock.

The California sun-drenched embrace of their harmonies and musical variety has cemented their reputation as true music legends, but don't just take our word for it. In 1969, after seeing one of their shows, rock immortal Jimi Hendrix declared, "I've seen Crosby, Stills and Nash burnin' ass... they're groovy, Western-sky music," - and according to Rolling Stone, Jimi "knew what he was talking about."

These three consummate singer-songwriters have more than lived up to this reputation, with their masterpiece debut LP Crosby, Stills & Nash jumping straight to the top of the charts and Rolling Stone's "500 Greatest Albums of All Time" list. That same year, they were honoured with the GRAMMY® award for Best New Artist and the following year 1970's Déjà vu also made the prestigious "500 Greatest" list. CSN have since captured the hearts and minds of an entire era, becoming inductees of the Rock and Roll Hall of Fame in 1997, as well as the Songwriter's Hall of Fame in 2007.

CSN have been performing music together for more than four decades and have weathered changing times and various configurations, while simultaneously captivating the world with their peerless three-part harmony vocals, inspired songwriting, musical virtuosity and social activism.

Don't miss your chance to experience these iconic singer/songwriters perform live in 2012.