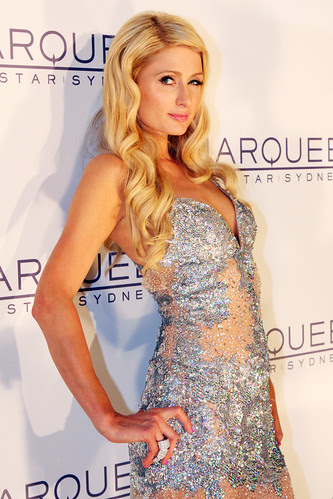 Australian entertainment and nightclub fans, and all you celebrity watchers out there... It's time for yet another showbiz update.

The Star's new nightclub Marquee in "Sin City" Sydney, Australia tonight held their grand opening last night and the ultimate party girl herself - Paris Hilton, along with boyfriend DJ Afrojack, and a bush tucker bag of friends and associates including Ashlee Simpson, Nick Lachey, Kellan Lutz, Abbie Cornish and LMFAO's Redfoo helped get the party started on the red (purple) carpet. By the way, the colour purple is supposed to attract money we understand, and it was working for Ms Hilton.

The gamble to sign up Paris and friends appears to have paid off, as far as attracting international headlines, but only time will tell what it does to the bottom line of The Star (once known as Star City Casino).

Marquee is understood to have snatched big dollars tonight, along with some positive press, but upping the ante in star power. Just how much it cost The Star to bring in Ms Hilton is anyone's guess but a well known media agency in Sydney estimated "between $50,000 to $150,000 for Ms Hilton and friends", but don't ever expect to find out the real figure as agents and legal eagles will be guarding that information from falling into the media and public domain.

The 20,000 square foot nightclub occupies the entire top tier of The Star’s new Pirrama Road harbour side entrance. It enjoys a 1,200 people capacity and is aiming to fill up the venue with the right sort of customers. It's understood that there's three separate spaces within the one venue, and there was something for everyone's mood and taste.

The Main Room sports a 30-foot projection stage with an LED DJ booth and two funky dance floors, while another section entitled 'Boom Box' has an outdoor patio and DJ booth. For those guests who are looking for a bit more intimacy... and we know your out there boys and girls, there's a "library-style" lounge room along with fireplace, where you might want to get all cosy with your best friends.

The new sexy nightclub is a joint effort between The Star and Tao Group, which operates very successful nightclubs in the United States including LAVO in New York and Las Vegas, TAO Las Vegas and Marquee Nightclub and Dayclub at The Cosmopolitan in Las Vegas.

We think its a pretty safe bet that you and yours will have fun (and spend a few dollars) at The Star's Marquee, so why not give them a go and tell us all about your experience.

It's all just another move in the Australian casino and entertainment wars, with a good dash of tourism biz factored in, and hopefully the public and Sydney benefit.

Competitor of sorts, Crown Limited, is following the progress of Sydney based 'The Star' closely, and the two gaming companies fight for the entertainment and gambling dollar, with big name celebs and casino "whales" being the most sought after patrons.

The Star will no doubt be hosting more celeb filled parties, but its unclear when Ms Hilton is returning to party (and pick up another payday). No word yet if she's got a whole floor to herself to sleep in and party (like Leonardo DiCaprio did on his previous down under Australian visits), but we highly suspect so.

Will you be on 'The List' any time soon at Marquee? Well, dress the part, work hard, and play harder, and you may soon be partying along with some of the world's hottest socialites.

If your into the best nightlife that Sydney has to offer you owe it to yourself to take the gamble and get on over to Marquee all you cool cats out there.

Thank you to everyone who helped make the event a hot success, and Paris - we hope you enjoy the rest of your stay in Australia.