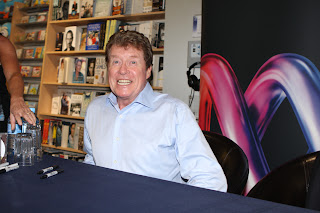 The famous Brit actor Michael Crawford today did an in store appearance at the ABC Shop, Queen Victoria Building to promote his new CD 'The Story of My Life'.
The original Phantom Of The Opera credits the launch of a new career retrospective The Story of My Life in Australia for inspiring his desire to sing again.
The 70-year-old musical theatre genius, who now resides in New Zealand's North Island, has been quite recluse like for the past few years after suffering chronic fatigue syndrome but now hopes to start "practising" his voice again soon.
Crawford told media the baby boomer love affair with the soundtrack of their youth was to blame for vintage rock, pop and theatre stars continuing their careers well beyond retirement.
"Look at The Stones; they were the worst example of the way to live and there they are still on the road filling stadiums," Crawford said.
"We all have got our own audience but with the baby boomer era there are a lot of people between 50 and 75 who still love music. It's a massive audience who are still around and went to see the acts they saw when they were 19. They go and see those people because there hasn't been anyone to supersede them."
Crawford invested 30 years practising vocal exercises five hours a day to keep his voice in shape for his musical theatre career, which bloomed after playing Frank Spencer in the TV comedy Some Mothers Do Have 'Em.
"That's what it entails to hit these notes and to have that sensitivity in your voice. It's athletic, this singing," he said.
"I don't know if I would have the strength to do some of the notes - I'd really have to go back and work hard."
Crawford has been a big hit with Aussie audiences throughout his acting and singing careers, selling more than one million albums here.
Who can forget catchphrases "Oh, the cat did a whoopsie in my beret" and "Betty". Then there's his rendition of the Phantom's signature anthem The Music Of The Night.
Despite his many sold-out concert tours of Australia, Crawford regards himself more as an "actor/singer" than a recording star.
"I am an actor/singer more than anything; I tell silly stories about myself, which is why people come to see me. We have fun," he said.
ABC Shop promo...
Story Of My Life - Michael Crawford Ultimate Collection...
An Australian only release, this two CD collection contains 30 songs and will delight all fans of the incomparable Crawford who has been a darling to Australian audiences since he was first seen in Some Mothers Do Ave Em and his first tour of Australian back in the early 90s. Having sold over a million albums in the Australian market and thousands of concert tickets across many tours - Michael Crawford is set to wow his audiences again with this hand picked collection of personal favourites and highlight moments from his recording career. 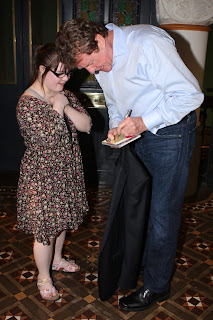 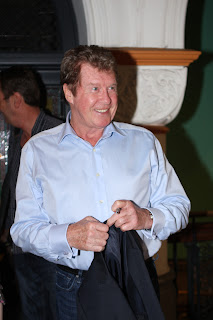 Track Listing
Disc 1:
1.West Side Story Medley
2.What'll I Do
3.If I Loved You
4.In The Still Of The Night
5.Memory
6.Bring Him Home
7.You'll Never Walk Alone
8.I Dreamed A Dream
9.What Are You Doing For The Rest Of Your Life?
10.Every Time We Say Goodbye
11.The Story Of My Life
12.The Music Of The Night
13.When I Fall In Love
14.If
15.Come Rain Or Come Shine
Disc 2:
1.Any Dream Will Do
2.All I Ask Of You
3.Wishing You Were Somehow Here Again
4.Tell Me On A Sunday
5.Gethsemane
6.The Phantom Of The Opera
7.Only You
8.Love Changes Everything
9.The Power Of Love
10.Stormy Weather
11.It Goes Like It Goes
12.She Used To Be Mine
13.Serenade In Blue
14.Speak Low
15.Papa, Can You Hear Me? A Piece Of Sky
We would like to say a big thank you to everyone who made today a success, and we'll see you on the red carpet again soon.
Websites
ABC Shop
www.shop.abc.net.au
Michael Crawford International Fan Association
www.mcifa.com
Eva Rinaldi Photography Flickr
www.flickr.com/evarinaldiphotography
Eva Rinaldi Photography
www.evarinaldi.com
Posted by Eva Rinaldi at Thursday, March 15, 2012