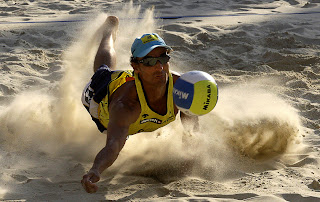 The SLAM Summer Beach Volleyball Festival is kicking off its national tour by way of an exclusive media launch today. Music industry talent, celebrities and media will roll out to the celebration at Sydney’s newest and most elite event venue.
Promotional blurb reads:
SLAM is a youth culture brand which produces the biggest beach volleyball festival in the southern hemisphere! More than just a damn good party: it's a community of girls and guys across the Australia who love their health and wellbeing as much as their music. As well as an overload of fun, fashion and music, SLAM is centred around an amateur and elite summer beach volleyball competition at the best beaches around Australia. We're committed to nurturing the sport of beach volleyball as well as to discovering and supporting the best and brightest emerging DJ and Aussie band talent around the country. We thrive on connecting with like-minded sponsors and brands who are just as dedicated as us to producing events that are all about creating an amazing experience you'll remember forever.
Who Is Coming?
Angus McLaren – Packed to the Rafters
Lincoln Younes – Home and Away
Anastasia Natasa Drimousis – The Amazing Race
Lincoln Lewis – Logie winner and Underbelly Razor
Sheena Reyes – Offspring
Rhiannon Fish – Home and Away
Blake Worrall Thompson – Cleo Bachelor 2011, Health and Well being expert
Alicia Banit – Dance Academy, Summer Heights High
Curtis Oakes – Home and Away
Dan Ewing – Home and Away
Kate Elsworth – Model/Dj
DJ Cadell – DJ
Where You Ask...
The Islands, Sydney Harbour.
Guests will be escorted on private water taxis from the Opera House to a floating island aptly named The Islands on Sydney harbour. This event will lend itself to some amazing picture opportunities with guests mingling in the VIP cabanas and lounging on day beds with the iconic Sydney Harbour as its backdrop.
When? Today 5.30pm sharp, Tuesday 22nd November.
Snapshot
In just over 10 years SLAM has grown to become THE biggest beach volleyball festival in the southern hemisphere
SLAM is gearing up to hit the best beaches around the country over the summer!
SLAM is a niche music festival centred around health and wellbeing
This year for the first year SLAM will feature an elite competition with some of Australia's best volleyball players
Kicks off on December 3rd and will wind up mid February
Travelling to best beaches around the country - Noosa (qld), Palm (nsw), St Kilda (vic), Scarborough (wa) and Glenelg beaches (sa).
Featuring some of Australia's best emerging as well as well known dj talent.
Well done to all who helped put SLAM together.
Websites
SLAM Summer Beach Volleyball Festival
http://www.slamfestival.com.au/
RARAPR
http://www.rarapr.com/
Eva Rinaldi Photography Flickr
www.flickr.com/evarinaldiphotography
Eva Rinaldi Photography
www.evarinaldi.com
Splash News
http://www.splashnews.com/
Music News Australia
www.musicnewsaustralia.com
Posted by Eva Rinaldi at Wednesday, November 23, 2011