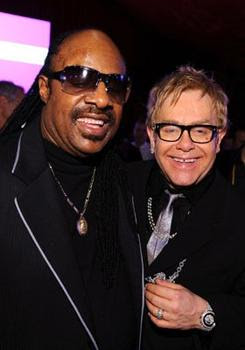 Stevie Wonder and Elton John
Sydney’s hip, revamped casino and entertainment complex, The Star (formally The Star), Sydney's casino that used to get a lot of mixed press, is now shining bright and the media and public at large have fallen back in love with the historic landmark. Well, most of the public and media, but you will always have the crowd with a great dislike of anything gambling.
Make no mistake, The Star is all about entertainment.  Yes, there is gambling also, but how about the list of events and celebrities The Star and its sister, the Lyric Theatre, are hosting.
Stevie Wonder and Elton John may be coming to The Star's Lyric Theatre in a few short weeks, but Leonardo DiCaprio is already there (occupying an entire floor). Leo's in Sydney to shoot The Great Gatsby, so its handy for him, only having to hike over to Moore Park Fox Studios. In free time Leo gets to spend some time with models including Kendal Schuler.
Musical genius Stevie Wonder (Stevland Hardaway Morris) is to hold a one-off concert on 26th October, and Elton John won't be far behind Stevie, doing The Lyric on the 26th and 27th October.
The Lyric promotes itself and offering intimate concert, and since it only seats 2,000 patrons at a time, that's a fair assessment. The venue is extremely comfortable, and its all included in the price, as you might have guessed.
Wonder's ticket prices are in the range of $255 to $455 per ticket, and Mr John's at $255 to $405.
Over Mr Wonder's amazing career he has sold over 100 million records worldwide and has earned 49 Top 40 singles and 32 number one singles.
His awards include 25 Grammy Awards, a Grammy Lifetime Achievement Award, an Academy Award and a Golden Globe (I Just Called To Say I Love You as seen in 'The Woman In Red' movie).
The event at the Lyric Theatre is Wonder's only Australian concert, so if you want to experience his musical genius up close you better dig into your budget.
Websites
The Star
http://www.star.com.au/
Echo Entertainment
http://www.echoentertainment.com.au/
Ticketmaster
http://www.ticketmaster.com.au/
Stevie Wonder official website
http://www.steviewonder.net/
Elton John official website
http://www.eltonjohn.com/
Eva Rinaldi Photography
www.evarinaldi.com
Eva Rinaldi Photography Flickr
www.flickr.com/evarinaldiphotography
Music News Australia
www.musicnewsaustralia.com
Casino News Media
www.casinonewsmedia.com
Posted by Eva Rinaldi at Thursday, October 13, 2011