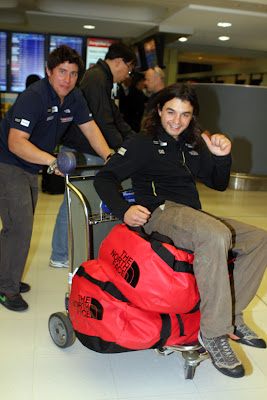 James Castrission and Justin Jones
Australian Adventures Cas and Joney have been snapped at Sydney Airport as they departed and take on a world-first Antarctic expedition attempt.
The twosome have impressive credentials, sporting a successful world-first kayak from Australia to New Zealand in 2008.
Cas and Jonesy will walk 2,200km from the edge of the Antarctic to the South Pole and back again to raise money for the Sony Foundation's 'You Can' campaign, in support of Australian youths with cancer.
James Castrission (Cas, 29) and Justin Jones (Jonesy, 28) have been planning the trek for over a year and are confident that they will succeed on their quest.
Their preparation included months of gruelling 10-hour training sessions.
Cas and Jonesy will each transport everything they need to survive for the three-month trek in two 160kg sleds, which they will drag over 2,200 kms through one of the Earth's harshest environments. The expedition will coincide with the 100-year centenary of Scott and Amundsen's race to the South Pole and the ever-present risk of yawning crevasses, piercing cold, hypothermia and frostbite are challenges the team will need to deal with on a daily basis.
The expedition endeavours to raise funds for Sony Foundation's charitable campaign You Can', which supports young people in Australia with cancer. Young Australians with cancer do not receive specialist treatment and are placed in either paediatric or adult wards. Supporters of Cas and Jonesy can 'Sponsor a Step' of their Antarctic adventure with all funds raised going towards the creation of specialist 'You Can' youth cancer centres.
Cas said "We're been training for this for a long time. This is what we do. Jonsey and I just love adventure". Our minds and bodies are ready for this. We're so excited".
Jonsey was just as positive and enthusiastic and added "On the Tasman the idea actually popped backed into our heads. When we settled back on dry land we mapped it out. After that (Tasman) expedition they realised that we would be doing this is a safe and responsible manner. I think mum would prefer us to be doing a normal job. We first started off in bushwalking school. It's quite complex trying to work out all of the logistics on something like this. We want to hit the south pole in first or second week in December and come back to the start point in mid January. That would be great".
The journey can be followed via their official website, where supporters can also Sponsor a Step for 'You Can'.
Stay tuned to the duo's website and blogs for updates on the latest on their historic expedition. 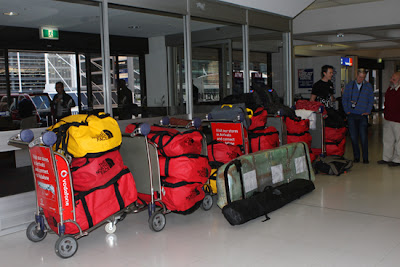 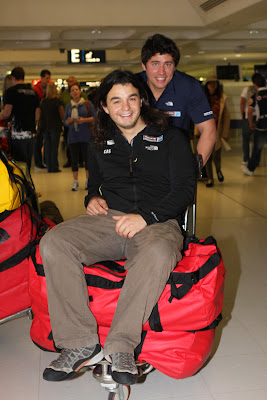 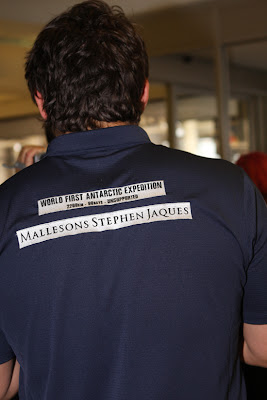 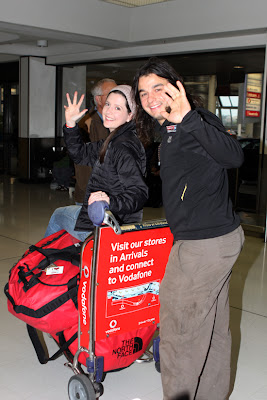