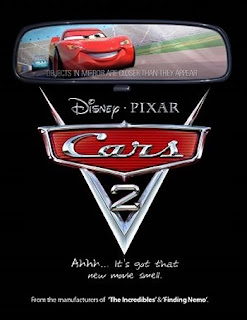 Cars 2 is a 2011 American computer-animated film produced by Pixar Animation Studios, and it is the sequel to the 2006 film, Cars. In the film, racecar Lightning McQueen (voiced by Owen Wilson) and tow truck Mater (voiced by Larry the Cable Guy) head to Japan and Europe to compete in the World Grand Prix, but Mater becomes sidetracked with international espionage. The film is directed by John Lasseter, co-directed by Brad Lewis, written by Ben Queen, and produced by Denise Ream. Cars 2 is also the first movie John Lasseter has directed since the release of the original Cars in 2006.
The film is being distributed by Walt Disney Pictures and will be released in the United States on June 24, 2011 and the United Kingdom on July 22, 2011. The movie will be presented in Disney 3D and IMAX 3D, as well as traditional two-dimensional and IMAX formats. (Credit: Wikipedia)
Websites
Cars 2
Sydney Film Festival
Eva Rinaldi Photography
Eva Rinaldi Photography Flickr
Posted by Eva Rinaldi at Friday, June 10, 2011