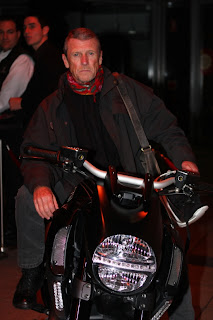 Tony Bonner on the Diavel
Bike (and classy design) fans, the long awaited release of the amazing Ducati 'Diavel' is over.

Tonight bike fans got to cosy up to a machine which will no doubt be the talk of the bike scene in Australia for months.

The ritzy Classic Design Bar at Sydney's Surry Hills was the venue for the upmarket-ish biker bash. Not a "bikie" in sight, and if there were any they were well disguised... they prefer Hog's anyway.

You want to know about the bike right? The blurb from the Ducati powers that be reads:

Even when disappearing in a split second, everyone will always be captivated. This is the magic of Diavel. The design sets new standards in beauty, innovation and sophistication, while outstanding agility and handling are encased within a muscular body which moves with 162 hp. Its astonishing power can be managed in three different Riding Modes and with the assurance of the Ducati Safety Pack (ABS + Ducati Traction Control). Ducati has created something truly magic.

The Diavel just happens to be the second cruiser motorcycle from Ducati, after the Indiana circa 1986–1990. The 2011 model year Diavel debuted in November 2010 at the EICMA motorcycle show in Milan, Italy. The engine is a returned version of the 1,198.4 cc (73.13 cu in) Testastretta from the 1198 superbike, now entitled the Testastretta 11° for its 11° valve overlap (reduced from 41°). If you've still reading you must either a bike or design freak.

A couple of entertainment industry types were spotted at the gathering, most preferring to let the bikes on display be the stars. We did however to get a word with Australian actor - director Tony Bonner who said of the new bike "I absolutely love it", and he didn't need too much convincing to hope aboard the machine for a photograph.

It was a fun, friendly and classy night and one befitting such a beautiful machine on two wheels.

If your in the market for a luxury cruiser bike which won't disappoint, you need to seriously consider the Diavel. If Knight Rider aka Michael Knight rode a bike we think that this might have been the one. Test ride it today to see what you think. 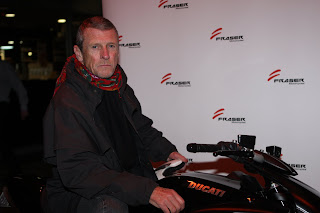 Tony Bonner on the Diavel 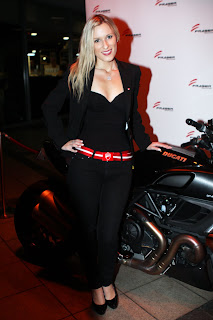 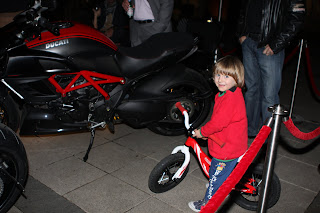