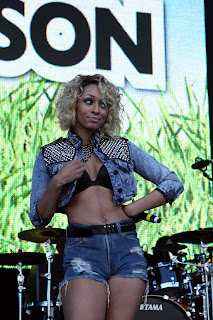 R&B’s sexy stars traveled Down Under for their first date of Supafest 2011, One of Australia's largest music festival. Keri Hilson lit up the stage in a studded denim jacket and a black bra, and a pair of cutoff shorts while performing material from her No Boys Allowed album live for the first time at Sydney’s ANZ Stadium.

Ciara wowed thousands of music lovers with her steps moves and beautiful voice as she and her troupe of dancers worked up a sweat onstage.

Hip-hop Spunks Nelly and Bow Wow had the ladies swooning, Bow Wow jumped off the stage and had the the photographers and security officers on their toes.

Timbaland pulled out of the gig but Game,T pain, Fat Joe, Busta Rhymes, Taio Cruz, and the New Boyz made up for his absence with their entertaining sets.

Snoop Dogg brought the West Coast to the land of Oz, closing out his performance by sharing the stage with Bow Wow on the classic “Who Am I (What’s My Name)?”

The four-date festival will also play Perth, Brisbane, and Melbourne, and is expected to attract over 100,000 music fans.