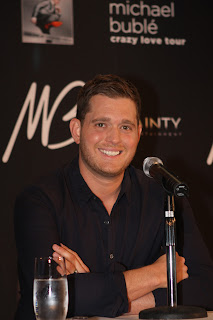 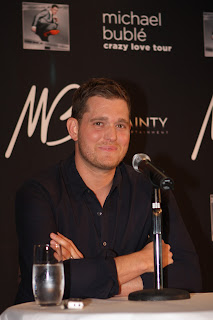 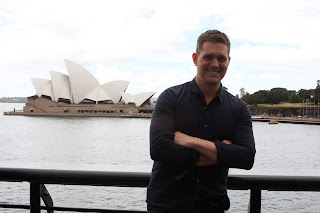 Photography by Eva Rinaldi
The time had finally come for one of the greatest singers of all time, Michael Bublé, to return to our shores, and he didn't disappoint the press gathering.
The setting was the beautiful Quay Restaurant at the Overseas Passenger Terminal, The Rocks.
This must have been one of hundreds, if not thousands of pressers for Bublé, but for me it was my lucky 3rd, since going pro only a few months ago.
The ultra gifted Canadian has won numerous awards, including two Grammy Awards and several Juno Awards. His first album reached the top 10 in both Canada and the UK. He gained tremendous worldwide commercial success and exposure with his 2005 album It's Time, and his 2007 album Call Me Irresponsible was an even greater success, reaching #1 on the Canadian Albums Chart, the U.S. Billboard 200 chart, the Australian ARIA Albums Chart and the European charts. At last count Bublé has sold more than 25 million albums worldwide. In 2010, with concerts achieving a levy of $65 million worldwide.
He has a soft spot for Australia, having toured here a massive 8 times before, 4 promo trips and 4 tours. I was impressed to learn that in February 2009 he pledged a donation of A$50,000 to the victims of the Black Saturday bushfires in Victoria, Australia. I knew he had heart and soul in abundance, and he clearly knows just how blessed he is. It just gives you a warm feeling to know he's reached out to some Aussies going through a tough time in a world seemingly removed from his jet set lifestyle.
The superstar whose hits include versions of Cry Me A River and Georgia On My Mind, will be appearing at Sydney's Acer Arena on February 14th, 15th and 17th 2011.
Commenting on the enjoyment he gets from playing live, the 35-year-old has said: "I just love getting in front of people. It's so important to be in touch with your audience. They've paid their money, I want them to be entertained."
Fans can expect to pay between AU$90 and AU$149.90 for tickets to his shows. Bublé will also perform in Melbourne, Brisbane and Adelaide during the Australian tour.
A big hug and thank you to you Michael.. I know you will get to read this eventually, and also for your world class team, especially the good folks at Kerry O'Brien publicity.
I think its fair to say that the industry needs more like Bublé.
With Valentines Day sneaking up on us all, taking in a Bublé concert or just buying his 'Crazy Love' release, seems like a mighty fine idea. Rekindle an old romance, or sparking up a new, it seems apparent Bublé's gift will touch many. You can't help but to love this beautiful man, and for me its time to fall back in love all together again. Thank you Michael. 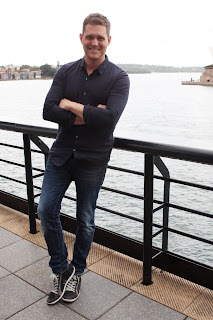 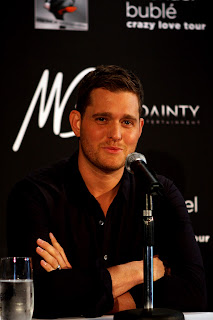