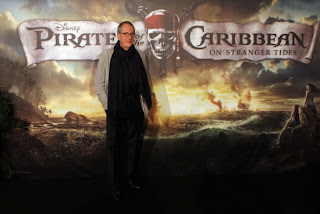 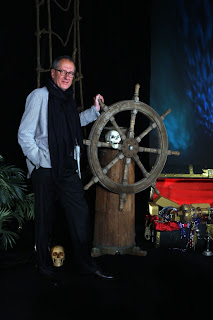 Jack Sparrow and Barbossa embark on a quest to find the elusive fountain of youth, only to discover that Blackbeard and his daughter are after it too.

And not only that, legendary Australian actor, Geoffrey Rush joins in the fun.

Johnny Depp and action adventure / fantasy genre fans are fired up about this tale of adventure, with the tried and true formula of good VS evil, on the high seas.

The charismatic and talented Depp has promised to keep up 'Pirates Of The Caribbean' appearances as long as people want him to.

Depp appears as the lovable Captain Jack Sparrow for the fourth time in new movie On Stranger Tides, which opens this week, premiering in Sydney tonight.

Seems the public just can't get enough of Captain Jack Sparrow, but this evening they had to settle for a supporting actor, namely Geoffrey Rush (Barbossa) and a swag of Australian celebrities in toe doing the red carpet thing.

It must be said that Rush was so giving of himself tonight to both news media and the fans at the Sydney premier.

Rush told our roving reporter on his decision to enter into the action adventure genre:

"It was all by freakish accident actually.  I was looking at the action adventure thing back in the late 90's ... when I did Mystery Men which unfortunately no one saw. You know what I mean. It's a bit hit and miss, you can never tell. When we started the first Pirates we sort of had the Hollywood curse hanging over our heads. Hollywood hadn't made a commercially successful pirate film since 1951. I think it was only when the idea about turning into a ghoul by midnight that's when Jerry Bruckheimer said now we've really got something."

Bruckheimer revealed at last Thursday's UK press conference for Pirates: On Stranger Tides that the team are "starting a whole new set of adventures for Captain Jack Sparrow" and referred to the stand-alone fourth instalment as a series "reboot".

With the diplomacy of a man who knows his entire investment rests upon Johnny Depp's willingness to mug his way through another extended Keith Richards/Pepé le Pew impression, Bruckheimer was, not surprisingly, full of praise for the man behind Captain Jack:

"The trick was, of course, to get Johnny back, and thanks to his efforts working very hard with our screenwriters, he committed to do this. He's very difficult to convince of something, because he doesn't want to disappoint his fans."

Bruckheimer confirmed that without Depp's character, there would be no POTC spin-offs (despite Geoffrey Rush chipping in that he'd pay to see one about On Stranger Tides' scantily clad mermaids).

Bruckheimer told the press, "The only spin-off is with Jack Sparrow. It's his invention, it's his series. He's made it a success along with a lot of other talented people, so it's his to champion, and hopefully, carry on."

Quizzed when we could expect to see the fifth instalment, Bruckheimer was careful to give nothing away, saying, "I think it all depends on how the audience embraces this one. We love the movie. We had a blast making it, and if everybody enjoys it as much as we do, then hopefully, we'll get the whole team back together again and do another."

It appears POTC4's opening weekend in the UK will tell, then, though Depp's resounding "Yes" to a question from the press about whether he'd consider playing guitar on the next film's soundtrack could say something about how committed he may already be to part 5 of Pirates.

On the director Rush noted "There was a real opportunity to put new blood into this, when the trilogy was finished. Gore was wonderful of the first three films. He comes more from the rock n roll side, crazy comic book aficionado. If you've seen Rango you know. Rob Marshal comes from the opposite side of the same coin. He happens to come from a more musical film background, musical, the choreography background, sense of sharp storytelling, shaping of the film and sense of tempo and stuff was really spot on."

Voyaging back north to Cannes with the star of Pirates...

He spoke at the film’s press launch in Cannes, Depp said he would stick with the role for as long as it is popular with the public.

He said: "Really, ultimately and truly, these films are made for the people. It's the people who go and pay their hard-earned money to see these things. If the people get tired of it or something - that's when it stops, I think."

Depp then elaborated further: "Some people lose sight of the fact that it is the movie business. If a lot of money is spent on making a film then certainly whoever spends that money expects to make a return on it. But that's not the reason we dove into it. That’s not the reason we go in and made asses of ourselves. We do it for the people. So long as people want it, I’m there."

Rush doesn't have a staring role, but he certainly gets decent time to show off his talent in the role of Barbossa.

Despite the non major role for Rush, national and international media have largely been keen to get Rush's view on the film.

It was put to Rush that Barbossa and Captain Jack Sparrow had quite a bit of conflict...

"Yes, one of the underlying story-telling motifs of all four ’Pirates’ films, right back to the first film, is that ongoing conflict – over the ownership of the Pearl. I think there’s a line in one of the films where Jack says "the Pearl means freedom." I think that’s the essence of being a Pirate, that you’re away from land-locked Europe, you’re not apart of a society, you’re apart of the brotherhood of the sea. Your ship is yours, it’s your sense of identity. So when you approach the wheel that’s what you own.".

Rush tells why he came back to do yet another Pirates movie...

"I have to thank Johnny Depp because I think in the development of the screen play, he wanted to keep the Barbossa and Sparrow relationship like an old married couple, constantly bickering. It goes back to the first film, the ownership of the Pearl is at the heart of that conflict. I think it was only on this film that we started to talk about the Black Pearl as a sort of shared girlfriend, I think that kind of made that plotline a little bit more interesting than talking about a boat. Over the four films they’ve kept shape-shifting my character which is fun. In the first film I start as the outright villain spat out of the mouth of hell. Then in two and three he became more of a diplomat, and I think now he’s really landed on his feet, or foot (laughs). Barbossa’s vain and arrogant and pompous enough to think that he actually does belong in the court, and that gave me a terrific new set of variables to play with which was a lot of fun."

Johnny Depp has said he "sponged" off Keith Richards to help create his Pirates Of The Caribbean character. The actor, who plays Captain Jack Sparrow in the long-running Disney franchise, famously used a combination of The Rolling Stones' guitarist and cartoon skunk Pepe Le Pew as the prime inspiration for Captain Jack Sparrow.

In downtown London for the premiere of the new film On Stranger Tides (May 12), Depp explained how he was initially nervous of Richards' reaction.

He said: "It was very strange initially you know when the character's main ingredients came up. I was a little worried at what Keith Richards was gonna think. I didn't fear Pepe Le Pew but I was a little worried about Keith. Because for a good portion of the time I was spending with him, I was sponging as much of him as I possibly could for the character. And when he found out what I’d been doing, it could've gone either way, but he was very nice about it, like 'I had no idea mate!' He was very sweet about it."

Richards has gone on to appear in the Pirates movies himself, joining the cast as Sparrow's father, Captain Teague. He reprises the role in the new film.

Depp expressed his delight, saying: "To be able to then bring him into the fold and bring him into the film and do scenes with him was amazing. It's one of those things you know has been seared into your brain and will never leave. It's one of those moments: "I'm really lucky to be here at this moment, and I'm really lucky that I'm aware that I'm lucky."

Captain Jack Sparrow (Depp) crosses paths with a woman from his past (Cruz), and he's not sure if it's love -- or if she's a ruthless con artist who's using him to find the fabled Fountain of Youth. When she forces him aboard the Queen Anne's Revenge, the ship of the formidable pirate Blackbeard (McShane), Jack finds himself on an unexpected adventure in which he doesn't know who to fear more: Blackbeard or the woman from his past. Written by Walt Disney Pictures. 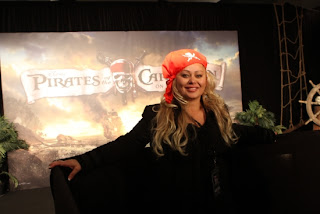 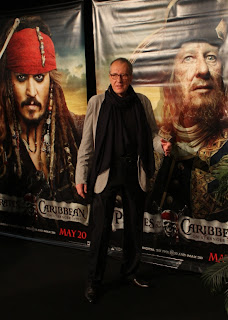 Pirates Of The Caribbean: On Stranger Tides
http://disney.go.com/pirates