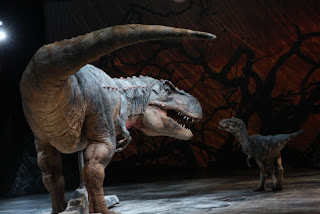 Just minutes ago Sydney based news media was attacked by dinosaurs walking around Acer Arena at Homebush.

Ok, not literally attacked, but you get the picture.

After a gigantic three year tour of North America, the Walking With Dinosaurs Australian tour has finally commenced on Australian soil.

We headed of to Acer Arena, with just a few butterflies in our stomach, not knowing exactly what to expect.  Little did we know the terror that awaited us.

The media sneak peak at these monsters featured 2 mains acts.

There was the the 11 metre x 17 metre Brachiosaurus, and what is being touted as the stars of the show - Baby T Rex and of course her mum, the 7metre x 13metre Mama T Rex.

Suddenly, with little warning the dinosaurs swung into action.  Mama T Rex and Baby T Rex greeted us, followed by a warm interchange between a mum and baby Brachiosaurus.

Since 2007, Australia’s own Walking With Dinosaurs - The Arena Spectacular has been on a record-breaking world tour, where the production has played to 6.5 million people and taken over $350 million at the gate.

Last year, Walking With Dinosaurs – The Arena Spectacular was the #1 worldwide tour - selling over 1.9 million tickets and outranking Bon Jovi, U2 and AC/DC! Further to this phenomenal success BRW Magazine also named the producers of Walking With Dinosaurs, Global Creatures, #1 on their prestigious Top 50 Australian Entertainers List for 2010.

Producer Carmen Pavlovic said: "Walking With Dinosaurs was conceived to create life-sized dinosaurs making the show so immense, that it could only fit in arenas.  The show is a $20 million spectacle of unprecedented size and quality that travels from town to town in a staggering 33 semi-trailers."

We spoke with resident director, Alli Coyne, and how the amazing show is put together: "By the time we finish in New Zealand we would have travelled to 30 countries, 60 cities, most of which I've never been to before either. It has to be very organised. There are 73 of us on tour at the moment. We've had over a hundred at times so the logistics of getting this show - 20 dinosaurs, in 33 containers at the moment, plus a crew of 73 from place to place means that we have to be incredibly organised and well planned in advance. We're on tonight. If you want to come and see us you need to get in quick."

Fans are clamouring from around Australia to see the show, and many travel from interstate to enjoy the once in a lifetime experience. Ms Coyne shared "We had a lady in on Saturday in Melbourne who had brought her grandson from Perth to see the show, so she'd flown from Perth just literally to see the show. They were staying one night and then they were flying back home again."

Andrew Blackman who plays 'Huxley The Paleontologist' shared his views on both entertaining and educational aspects of the production: "It's a fabulous experience from my particular point of view being down on stage with scale puppets. You've seen yourself, they look incredibly lifelike. How can you get closer than this. Maybe Jurassic Park with DNA and actually creating dinosaurs, but actually being on stage with such lifelike animatronics is absolutely amazing. The dramatic conflict doesn't happen between another human being, it happens between the dinosaurs. My role as 'Huxley The Paleontologist' is really to be excited, involved in what is going on, and to be absolutely blown out by these creatures that actually did live. There's a journey through the lives of dinosaurs. 170 million years and the early stages of the earth, so there's elements of documentary expertly told by Huxley, but at the same time when dinosaurs appear that's that feeling of wonder and awe, and excitement of there they are, and when there's conflict and the carnivores are chasing the herbivores, real excitement and danger. It brings out the big kid in all of us".

The paying public will be pleased to hear that tickets can be purchased from as little as $50, which by Sydney standards is extremely reasonable.

Fellow human beings, see you tonight if your game. Not just another concert. This is unique, entertaining, educational, and you don't even need a time machine to travel back 65 million years.

WALKING WITH DINOSAURS – The Arena Spectacular national tour dates are: