Beachley Classic surf comp: Pros and celebs do Dee Why by Eva Rinaldi - 7th May 2011 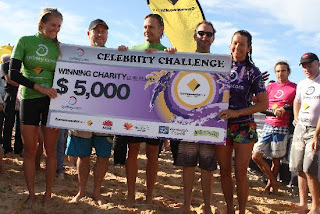 The news that tons of celebs would be surfing, playing volleyball and just hanging out at the beach is what got my main interest, but at the same time, great to see the pros in action also.

First the serious stuff...the Beachley Classic for the bragging rights and the money, of course. Good on the Commonwealth Bank for pumping in thousands of dollars into the event, and we think they got exceptionally good value for their sponsorship dollar.

Hawaii's golden girl of surf, Carissa Moore, may have beaten the last remaining Aussie hope Stephanie Gilmore to progress into the final of the Beachley Classic, but we all felt like winners.

Moore defeated 2004 ASP Women's World Champion Sofia Mulanovich, 27 to snatch her second out of four finals this season, winning a cool US$40,000 winners cheque and returns to her position as the ASP Women's World No. 1.

The media friendly Moore shared "I'm really, really happy, I've been fired up ever since the last two events with Sally (Fitzgibbons) and I'm just super excited I was able to come out on top this time."

"I was really excited to make another final and it was refreshing to have a Sofia as an opponent," Moore said. "She was leading for most of the heat and I was kind of nervous out there."

Moore's victory today secures her a comfortable 3350 points ahead of closest rival Sally Fitzgibbons, 20, (Australia) on the ASP World Title ratings and has got insiders talking about her now being see as the surfer to beat with just three events to go.

"I'm trying to not think about the World Title too much, I know that there's a lot of girls within range, so I'm just going to keep my head down and have fun."

Mulanovich to her credit reached her first final this year. and beat ASP ratings leader coming into the event Sally Fitzgibbons (Australia) in their exciting semifinal clash, before placing runner-up to Moore in the final.

"I haven't been on the podium for a I while and I'm just stoked to be here, it feels amazing!" Mulanovich said. "Carissa is an amazing surfer and she's really hard to beat although I was beating her for a while out there, I surprised myself."

Fitzgibbons felt short of her own expectations today sighting poor wave-selection her downfall against Mulanovich. She's now out of the ASP World No. 1 spot.

"I can't be disappointed with a third place but I think the waves weren't in my favour, I just didn't quite find my rhythm," Fitzgibbons said. "Some days you have it like in Bells and New Zealand and some days you don't and today I just wasn't quite there."

"You know the World Title is something you're always reaching for and I feel like I still have a lot to give," Fitzgibbons said. "World No. 2 is a good place to be at so I'm just going to hold my head up high and hope to get that rhythm back at the next few events and hopefully snatch a few more wins along the way."

"Third place is definitely frustrating, it's an ok result but it's not quite enough to satisfy me anyway," Gilmore said. "I felt like I was surfing really good but it just came down to wave selection. Carissa got such a good start and I think I got a little too relaxed when I got a really high score and let my guard down." Despite posting the highest individual wave score of the event, a 9.60 (out of 10.00), Gilmore was failed to grab a second ride with sufficient scoring potential. Her result today moving her up one place into The World No. 4 spot.

"I feel much stronger and more confident and so for me it is just about building on each result and reaching for the top spot again."

Layne Beachley and a dozen celebs fought for $5,000 for their nominated charity at today's Sydney.com Celebrity Challenge. It was part of Family Day at the Commonwealth Bank Beachley Classic.

Teams warmed-up on the sand with a game of Volleyball followed by an Australian tag team rules style surf comp. All celebs rode long boards.

Last year, Sydneysider Miley Dyer led her all-star team of former ironman Guy Leech, Biggest Loser trainer Shannon Ponton and Sydney Olympics volleyball gold medalist Kerry Pottharst to victory by less than a point. Going up against Leech and Pottharst again this year, Ian 'Dicko' Dickson says of the challenge, "This year I'm ready to win the Celebrity Challenge at the Beachley Classic. I've been training long and hard all year for this. They won't know what's hit them." Dicko also kindly shared his thoughts with our team of reporters and the exclusive video footage will be going live soon.

Congrats to the green team who won the the celeb surfing challenge, and well done to everyone who participated in today's happening at Dee Why Beach. It was a great day to be Australian. Layne, you did Australia proud today and your legend and legacy continues to grow. You transcend surfing, and keep building upon the strong foundations you laid down years ago. Thanks for the interview with our crew too.

Beach, fun, sun, world class effects and results... that's what its all about folks.

Stay tuned for some great video footage from today including interviews with Layne and Dicko, as well as some exclusive photos of all of the fun in the sun, and see you back there next year. 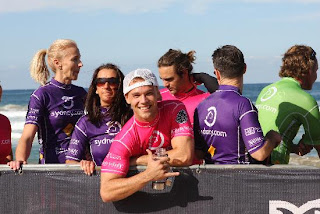 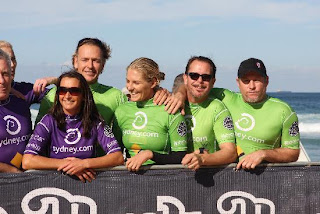 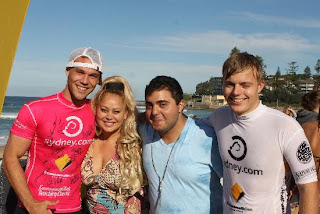