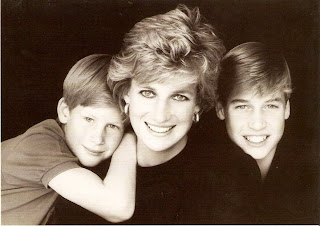 I was so excited to learn that royal Prince William is to travel to Australia in late March, followed by a visited to New Zealand.

Unfortunately his bride-to-be won't be joining him on the upcoming visit, however she looks forward to visiting down under soon.

Today my agent, Greg Tingle, New Ideal editor Kim Wilson, and Royal commentator Dickie Arbiter, along with myself discussed Prince William's upcoming visit at the Channel Seven Sydney studio. The show was hosted by the warm and gifted Larry Emdur and Kylie Gillie.  It was my second recent appearance on 'The Morning Show' discussing photography, but today was very special since it was about the Royals, and Prince William has his wedding coming up soon also with Kate Middleton. Oh, I must share this... my surname is actually a name linked to the royals, so I felt pretty at ease today.

William and Kate, if you're reading this, I would dearly love to meet you and take your photo when the opportunity presents, and I promise to take beautiful photographs of you. I would also like to say that your mother would be so proud of you God Bless her beautiful soul. May she rest in peace.

The 28-year-old prince is visiting to demonstrate solidarity with the people who have suffered horrible disasters in recent months. Floods and cyclones trashed much of Australia and a deadly earthquake hit New Zealand.

Prince William is set to arrive in Australia on Saturday, March 19, after a two-day visit to the Kiwi's.

He will visit a number of regions affected by the recent cyclone and flooding in Queensland, before heading down south to see the flood damage in parts of Victoria.

A Clarence House spokesman, representing the Prince, was able to confirm the 29-year-old Middleton will not make the trip.

"The two discussed the issue and felt that because Prince William would be representing the Queen that he should visit alone. Catherine looks forward to visiting on another occasion." Word quickly spread to traditional and new media outlets.

During his time in New Zealand, William will visit Christchurch, which is recovering from a 6.3 magnitude earthquake that killed at least 166 people when it struck the South Island city last month.

The prince will attend a national memorial service for the quake victims in Christchurch on March 18, where he will be addressing the people.

"This is a heart-warming gesture that will mean a lot to the thousands of people whose lives have been forever changed by these events," New Zealand Prime Minister John Key said on Wednesday.

William will also visit the South Island town of Greymouth to speak to the families of the men killed in the Pike River coal mine disaster.

Two Britons and two Australians were among the 29 men killed when they became trapped by a gas explosion at the underground mine in November last year.

"The reason for the visit was that the royal family wanted to show solidarity with the Australian and New Zealand people at this time of devastating natural disasters," the Clarence House spokesman said.

"They've watched the unfolding tragedies, first in Australia and then in New Zealand, with great sadness and disbelief.

While it's not known which towns the prince will visit in Australia, he's tipped to get a welcome reception.

"I'd shake Will's hand if he popped in. I'd shout him a beer," publican Steve Sutcliffe told the press from flood-affected Lake Boga in Victoria.

In Tully Heads, a Queensland town ravaged by category five Cyclone Yasi last month, local woman Norma Eadie said the prospect of a princely visit was "cool" but it was a shame he'd be alone.

"But someone might ask him about the dress. We've got a few cheeky ones down here," she said.

"The prince's visit will provide immense support and comfort to communities and families stricken by these floods," Baillieu said.

Queensland Premier Anna Bligh said the visit would do wonders for her state's struggling tourism industry.

"I hope that he sends the message back to his friends and colleagues in the UK that Queensland is open for business and that while he's here he gets an opportunity to see that himself," she told parliament.

Australian Republican Movement (ARM) deputy chairman John Warhurst said the prince's visit, like all royal visits, would reignite the debate about the move to a republic.

"We respect the visit ... and we hope it achieves its objectives and is successful," Prof Warhurst told the press.

"But the ARM will take every appropriate opportunity to make the point that Australia should become a republic well before Will gets anywhere near the throne."

The trip will be Prince William's third to Australia but his first in an independent, official capacity.

As a baby, William accompanied his parents Prince Charles and Princess Diana on an official visit to New Zealand and Australia in March 1983.

And in January 2010 William paid a private visit to both Sydney and Melbourne.

Additional details of William's upcoming trip to Australia and New Zealand are due to be released by the country's respective prime ministers.