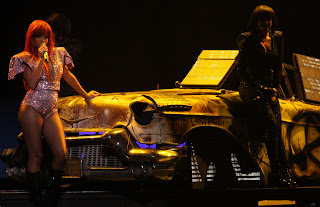 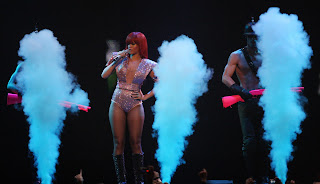 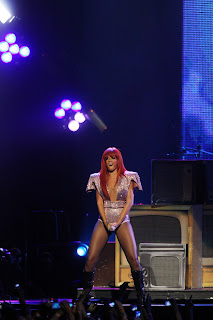 Australia had been looking forward to the return of Rihanna, and tonight she didn't disappoint with her 'Last Girl On Earth' tour.

Seven hours earlier she tweated 'Sydney U ready to play?'  Seems were certainly were.

Her hottest current hit is 'Only Girl' (In The World), but most major music press predict that it won't be long before she soon finds another number to eclipse it.

Sydney's Acer Arena looked to be near capacity and the crowd was pumped, as screams of joy were heard well before it was announced Rihanna was heading to the stage. The excited fans reached out forming a sea of hands.

For those of you still getting more familiar with Rihanna, let's groove into a bit of background.

Robyn Rihanna Fenty is known to the world as just Rihanna, joining that first name only required club.

R is a Barbadian R&B recording artist and songwriter. Born in Barbados, Rihanna moved to the U.S at the age of 16 to pursue a recording career under the tutelage of record producer Evan Rogers. She went on to sign a contract with Def Jam Recordings after auditioning for then-label head Jay-Z.

Rihanna has sold more than 25 million albums and 45 million singles worldwide. She has achieved nine number-one singles on the Billboard Hot 100 since first appearing on the chart on June 11, 2005, which is the most by any artist during that duration.

Rihanna has sold over 5,564,000 album units in the US. She has sold over 10 million records in the UK. Billboard named Rihanna the Digital Songs Artist of the 2000s decade. She has received dozens of industry awards and commendations including the 2007 World Music Awards for World's Best-Selling Pop Female Artist and Female Entertainer of the Year, as well as the 2008 American Music Awards for Favorite Soul/R&B Female Artist and Favorite Pop/Rock Female Artist.

I was pleased to learn the she proudly serves as one of Barbados's honorary cultural ambassadors. In January 2010, Rihanna received two Grammy Awards for Jay-Z's 2009 single "Run This Town". In February 2011, Rihanna snatched a Grammy Award for Best Dance Recording, as well as receiving a Brit Award for Best International Female Solo Artist.

Back to tonight, unfortunately as a photographer, I was only permitted to stay and shoot for 3 songs.  I didn't get to hear my favorite 'Te Amo', but I must say I loved her colourful and floral dress from Halfpenny London with hand-painted Kate Moross flowers. She wore similar outfit at 2010 MTV EMA and her vocals. Her energy is also so radiant and just makes your want to dance along with her.

Rihanna's current release is entitled Loud, but the diva has a soft spot for Rated R, which went down well with fans and industry insiders. She says on her albums "I'm gonna miss the Rated R era too, but nothing compares to the album I just made," Rihanna said, adding, "I made sure not to let you down with my music. You guys are always defending me, so now you’ve got some great songs to justify it. I didn’t want to go backward and remake Good Girl Gone Bad. I wanted the next step in the evolution of Rihanna, and it’s perfect for us".

She's strongly rumoured to be appearing tomorrow night at the Sydney Mardi Gras but in what capacity I don't know. Mind you, she was spotted leaving a sex shop in Sydney earlier today, so she's should be well prepared.

Sexy, sassy, amazing talented and all diva... that's Rihanna, and boy can she move, groove and sing up a storm. The gods and goddesses above must have tipped her off about Mardi Gras, or was it some of the cleaver dicks at Frontier Touring and MG Promotions, that tied her into Sydney's sexiest event of the year. Rihanna and Mardi Gras less than 24 hours later. Now that's a sexy daily double if there ever was. Rumour is she's already planning another tour down under next year. Yes, the love (or lust) affair in mutual. Thanks Rihanna, and I will be looking out for you tomorrow. Something tells me that you will be wearing either a bit or alot of pink, and a dash of colourful flowers, matching one the dresses you wore tonight. Go girl. 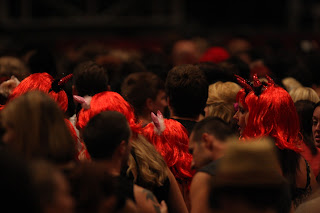