The 25th Summernats festival reved up things for Canberra again today as it continued on with parade of show cars.

It was Summernats where we discovered one of our fav new rock band discoveries - Heaven The Axe.

In the festival's showcase watering hole - The Jim Beam Bar - rockers Heaven The Axe were doing some reving up of their own... and talk about Loud and V8 style fan interaction.

However, it wasn't just about cars at Summernats as event co-owner Andy Lopez told the press. It was more about entertainment and a more family atmosphere, but make no mistake - it was mainly about the cars...and a good dose of loud music - as if the roar of the engines wasn't enough to burst your eardrums (earplugs are provided upon entrance to the festival - satisfying OH&S regulations).

Our favourite band at the festival was 'Heaven The Axe', and they sure gave our eardrums a workout, as well as kept on camera crew of its toes with all the jumping around on (and off) stage.

Their performance was not so much catering for the family friendly theme, but more for those who enjoy hard metal rock and they played at the Jim Beam Bar - an 18+ venue at the festival.

Event co-owner Andy Lopez, who purchased Summernats said on the event: "This isn't a choir convention, but at the same time we're not like a gathering of satanists either".

Heaven The Axe (fronted by leather clad Phoebe Pinnock), who is a bit of a Joan Jet - Angus Young (AC/DC) hybrid in our estimation and anyone who dares experience their breed of hard rock will not be disappointed.

Pinnocks said "I wanted to be a stripper first...and then music stole my heart".

The band's website tells the world of the wildchild...music was the only thing that kept her alive after being orphaned at a young age and a year of working as a dancer in the Sydney’s notorious badlands, Kings Cross.

Heaven The Axe was a bit of an interesting choice of band for this years Summernats, given what is at least perceived as a bit of a watered down hard edge and more rated PG environment. We're sure glad the promoters went with 'The Axe'.

Summernats mainly attracted the nations most talented motor and mechanical craftsmen, artists and all matter of other folks who are in the business of hotted up cars. They also attract news media from from across the country - and this year its been mainly positive, with the festival being pro active to remove the more troublesome aspects of years gone by. The festival also adds a much needed boost to the ACT economy, with nightclubs, hotels and restaurants all reporting business definitely being up since the car-show hit down.

We're dead set convinced that Heaven The Axe attracted a good dose of rock lovers to the famous festival - whether they were big on cars or not.

Speaking of music, a big G'day and congrats to Radio Revhead who provided on location broadcasting at Summernats. John McCoy-Lancaster and special guest in from Utah 1060AM U.S - J.C Hackett were the voices of the show, and something tells us that Team Radio Revhead may help rocket Heaven The Axe on an international scale - especially in the exciting U.S sector.

Heaven The Axe recently released their debut record titled 'Sex, Chugs & Rock 'N' Roll' and we suggest you check it out real quick so you don't deprive yourself any longer.

They are consistently Number #1 on unsigned radio charts from around the world and there's good reason for that. Witness Aussie music history in the making today and check em out. 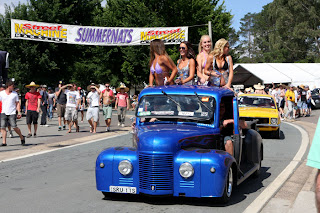