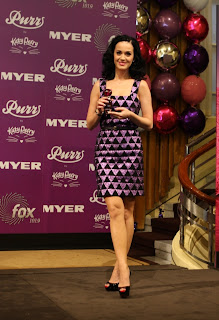 We're in Melbourne early for the TV Week Logies, and so is Katy Perry, who wowed, teased and entertained thousand of fans at Myer in the Melbourne CBD today.

Not to anyone's surprise there was no sign of husband Russell Brand, but that didn't stop the media or crowd asking, as they are quite the power couple these days.

The 26-year-old performing artist looked sensational and was very accommodating with both fans and media.

We learnt that she just loves Australians easy-going attitude, our weather (thank you Melbourne for the miracle sun and no rain today), Tim Tams, and eskies.

"I love being around all kinds of characters in Australia," Perry told the crowd of thousands, when they finally settled down from a massive 'We want Katy' chant, which must have gone on for at least fifteen minutes.

Some of the crowd rushed to Myer retail departments to snap up both Perry CD's and Purr perfume (which gives an "added bonus" to your man, Katy was quick to point out to us.

The queen of 'Teenage Dream', and soon teenage retail, is struggling with her Aussie lingo, but we give her top marks for effect, attitude and generosity of heart and spirit with her multitudes on fans hanging on every word and move. She got her cosses mixed up with eskies, but that's ok. Katy looked like she might do well to get a bit of sun, so someone needs to tell her where Bondi Beach is.

Perry had the crowd screaming and clamouring for photos and autographs, and as usual, security had a tough job, with most of them doing their job well.

Bourke Street mall came to a standstill, as 1000 or so fans stood behind steel barricades just hoping to catch a glimpse. Four Katy Perry look-a-likes kept the crowd entertained and and teased the press with purr fect poses with the perfume of the hour. Oh, the trams kept running, but slowed considerable, as passengers soon realised what all the fuss was about.

Perry commenced her first Australian tour in two years with shows in Melbourne on Thursday and Friday nights and is the big-name international act for tomorrow's Logie awards at James Packer's Crown Casino.
Her appearance today was actually to flog her new fragrance, Purr, and we estimated at least 500 units were sold. Even a couple of Aussie teen lads bought the Purr, which helped them get a photo, as you might have guessed.

We loved that she answered a journo's probing question about receiving plenty of male attention.

"I'm a big believer in sharing so I like to share myself. I feel like I'm in a relationship with all of you plus my husband. I feel like the people that support me and my music and who come to see my shows are choice people; they have good taste, they're smart, they're funny, they like to have a great time, they like to laugh. And also they're very respectful ... if anyone gets too close I karate chop them."

An unidentified reporter asked Katy if she could ask Russell if she could take him home or something to that effect. She laughed it off and then added he might be able to stay in the granny flat room for a bit. Security and minders swiftly snatched away the mic off the shortish mystery media guy.

It was quite a wait for the American sensation and but all agreed the reward was worth it. Perry said "You guys were making so much noise when I was trying to use the restroom".

What a Purr Fect day in Melbourne today if you made it, and we can't wait for the main course tomorrow at the Logies and follow up shows as her Aussie tour continues.

We loved you Katy, and so did our cameras. We can't wait to show the world our great photos and videos of you. The visuals are purr fect said a Music News Australia spokesperson. 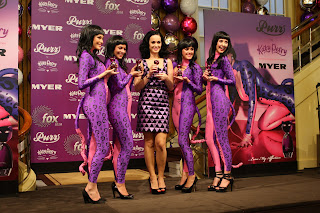 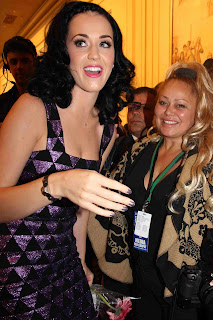 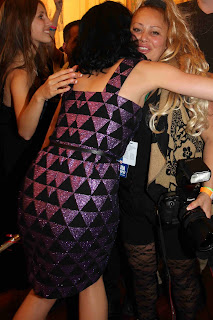