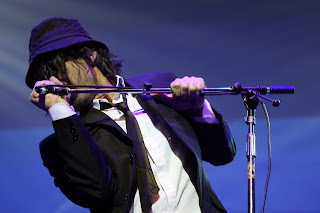 Paying tribute to one of the world's greatest ever bands, Pink Floyd, was never going to be an easy task.
I'd been hearing mixed reports for weeks leading up to the Sutherland Entertainment Centre show this evening, so to be honest, I was just hoping for the best.
With the rain bucketing down at Sutherland I was getting nervous about tonight, for both the band and the promoter, but I'm pleased to report that my fears proved unfounded. This tribute band is world class, at least in my estimation, but I'm sure that they're will be other critics and would be's, if they could be's, that will want to argue with me.
Sydney audiences can be such a spoilt lot, always looking for the negative - the glass always being half empty, rather than half full.
We entered the venue and the vibe was warm and inviting, the joint was packed. The show was very near capacity. There must have been a few insiders and media types in attendance, as after a song or two a few voices from the crowd called out "faster", followed by "louder, and many music types will know that there's a music entertainment website portal called Faster Louder. My friend was tempted to call out 'In The Mix', just to make it fair, but he someone resisted temptation.
The band comprises of Steve Balbi on vocals (Noiseworks), Peter Skelton (drums), Ian Tilley (bass), Paul Najar (keys), Aaron Michael (sax) Peter Northcote (guitars) and Joseph Calderazzo (guitars). They were also joined by an impressive section of vocal artists Krishna Jones (Juice), Mitchell Anderson, Miss Min and Robyn Laou.
I was delighted that they played some of the greats the original group was best known for including 'Another Brick In The Wall', 'Dark Side Of The Moon' and 'Money'. 'Brick' was a pleasant surprise with female artist Jones dressed in school uniform belting out the chorus, doing such a fine job that it didn't seen out of place.
Balbi put on a fine show and reminded me of a cross between Johnny Deep and lead from The Doors, Jim Morrison. Balbi had a dark side too him I felt, but also showed some light when he spoke to the other side with classic ballad 'Wish You Were Here'.
Speaking of dark, arguably the darkest song of the night was 'Nobody Home', performed by Robyn Laou.
It's needs to be said that the sound, lighting and video special effects were top class. The big screen effects added a lot to the performance aspect of the show, but at the same time were not a distraction from the bands fine talent.
The creative director was Joseph Calderazzo, who must be happy with his end result, judging by tonight's fine performances, and promoter Martin Contempree hit the mark, as did publicist Christina, who did a wonderful job of looking after my media requirements.
Oh, the homely venue also offered free tea and coffee for patrons, which we quickly took advantage of, and alcoholic drinks were also very reasonably priced. These aspects do make the event and experience all the more pleasurable, and make one more inclined to support the venue, brand and promoter again.
Tonight was proof that tribute bands can be world class and don't have to be seen as second rate knock offs. My favorite track may have been 'Just Another Brick..', but I can confidently report that this was not "just another tribute band". Judging by the audience reaction it's a safe bet that even the original Pink Floyd would have respected their performance. 8 out of 10, and would I go again - Yes. 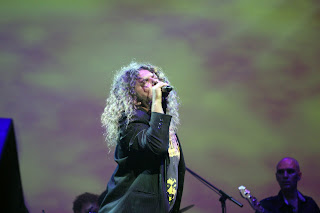 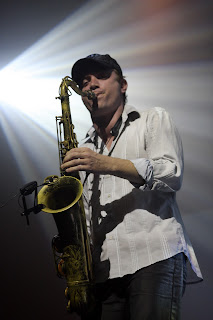 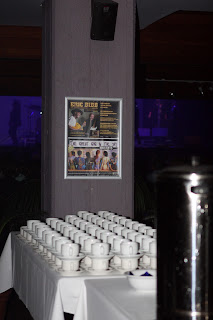 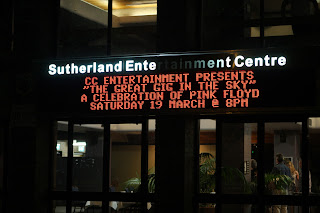 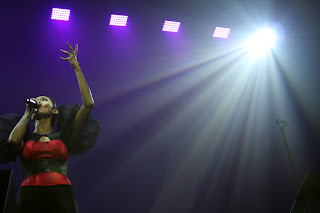