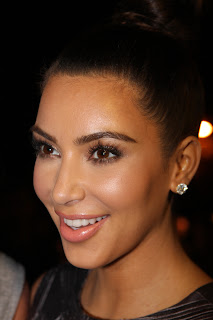 Kardashian mania has once again hit Sydney, Australia, for better or worse.
One has to ponder the question... what are they flogging this time?
We understand Kim and clan are promoting their new diet program (which has garnered less than stellar reviews on American soil).  Maybe the strategy is to spread the seed far and wide and hope that some fertilise. If you believe the detractors, 'The Devil Wears Prada', and whispers about a "wolf in sheep's clothing".
Cosy Rushcutters Bay restaurant, Neild Avenue, was the venue to the red carpet, as media melodrama played out on the footpath as it was a battle between media with those who had media accreditation VS those without (which were the vast majority). A PR agency who will remain nameless for now handled the media relations (which we have been told by many was not well handled).
Leaving new boyfriend Kanye West at home and keeping most of the juicy details of their romance off limits, Kardashian advised she had set new boundaries in a bid to protect the relationship and herself from the close scrutiny which followed her divorce from basketballer Kris Humphries.
While West has appeared in the latest season of Keeping Up With The Kardashians, his girlfriend has promised to keep private their intimate moments.
In Australia for Foxtel's E! Channel and diet supplement QuikTrim, the 32-year-old said her painful and public split had taught her to "hold back (sharing) a little bit with my new relationship."
"I don't share everything. Yes, Kanye has been in a few episodes, but that's only natural when he's in my life. He's around when I'm filming, but I don't think I'd really share our intimate dinner dates (on the show) which I would have so willingly done before."
Her latest 48-hour Australian publicity blitz reflects her rushed visit about 12 months ago, when she came under the gun for flying back to Los Angeles early amid international criticism and media accusations she had married Humphries for a huge TV pay day.
The fallout was filmed as part of the popular reality series, which has also documented - in brief - her romance with West, who had already been a friend for eight years.
A relaxed Kardashian said that "it was definitely a very difficult time".
"But I feel like I'm just in a better space now. I feel content with everything and where my life is. I feel happy and I have no regrets," she said.
"I'm a different person because of it. I've grown up, I've really grown up... that situation made me grow up. I just feel at a good place in my life right now."
Press Release...(U.S news release)...
E! News Welcomes Celebrity Guests and Guest Hosts.
E! News To Get Special Guest Hosts: Pop Star Carly Rae Jepsen And WWE Wrestler John Cena As Guests Plus E!’s Bruce Jenner, Singer/Songwriter Christina Milian and TV Host & Personality Melissa Rycroft As Celebrity Guest-Hosts...
E! News Welcomes Pop Star Carly Rae Jepsen And WWE Wrestler John Cena As Guests Plus E!’s Bruce Jenner, Singer/Songwriter Christina Milian and TV Host & Personality Melissa Rycroft As Celebrity Guest-Hosts
E! News, the destination for pop culture news and information, welcomes a slew of celebs to the set over the next few weeks. Bruce Jenner, Christina Milian and Melissa Rycroft will guest host while E! News anchor Giuliana Rancic is on leave with baby Duke. Plus, Carly Rae Jepsen stops by to discuss her new album and John Cena swings by to chat about his new initiative with the Susan G. Komen Foundation.
Mark your calendars:
September 18– Carly Rae Jepsen visits E! News to discuss her new album and upcoming duet with Justin Bieber, “Beautiful.”
September 19 – TV host and personality Melissa Rycroft guest hosts with Jason Kennedy.
September 21– Pop star Christina Milian guest hosts with Jason Kennedy.
October 8– Former E! News Correspondent for the Olympic Games and E! fan-favorite, Bruce Jenner, guest hosts with Catt Sadler.
October 9 - WWE Superstar John Cena visits E! to talk about his new initiative launching with the Susan G. Komen Foundation.