Kenny Rogers is an American singer-songwriter, record producer, actor, photographer and entrepreneur.
He has been most successful with country audiences and has charted more than 120 hit singles across various music genres and topping the country and pop album charts for more than 200 individual weeks in the United States alone.
Tonight Rogers performed to an appreciative Australian audience at the famous State Theatre in Sydney.
He was supported by Australian country legend John Williamson and I couldn't think of a better support in the world, but there can be little doubt that the majority of people were there to see Rogers.
Rogers is one of very few artists who have enjoyed successful careers in such a variety of genres - jazz, folk, rock, country and pop. Houston-born Rogers formed his first band while in high school in 1956 - a rockabilly group called The Scholars (they performed on American Bandstand) - and has never quit making music. He played stand-up bass in the jazz group the Bobby Doyle Trio, and later became a member of the popular folk group, The New Christy Minstrels. The spotlight started focusing on Rogers when his group, The First Edition, scored their first hit, "I Just Dropped In (To See What Condition My Condition Was In), which was followed by the pop and country chart success of "Ruby, Don't Take Your Love To Town."
Rogers' solo career shot into the stratosphere with the #1 hit, "Lucille," which was named the CMA's Single of the Year and was certified Gold.  "Daytime Friends," "Sweet Music Man," and "Love Or Something Like It" continued his run of success. Then came "The Gambler," a story song so vivid it not only delighted country and pop fans, it also became a TV movie, starring Rogers himself in the title role. The movie spawned four follow-ups, making it the longest running miniseries franchise on television. The five Gambler mini-series have attracted over 100 million viewers nationwide and launched a second career for Rogers as an actor on television and movies.
News...
Kenny Rogers autobiography out in October...
With Rogers 50 years of performing and 120 million album sales, there's a lot to write about.
He says "It stirs up certain emotions that you'd forgotten about. Particularly when your life has been as busy as mine - it's kind of hard to keep up with things"
"I must admit I enjoyed writing it. I enjoyed that process. I don't know that I'd want to do it again."
More News...
The pinnacle of his career is in the late 1970s to '80s and includes hits such as The Gambler, Lucille, Coward of the County and, with Dolly Parton, Islands In the Stream. He has had 24 No.1 hits.
"Once I started with Lucille [in 1977], it was like an indescribable career for anybody, so you have a look at that and say: how can you not have enjoyed that?" Rogers says. "But I have to tell ya: too much success is not good either. I'm at a great place right now where I sign enough autographs to satisfy my ego, but not so many that it invades my privacy."
In 2009 Rogers did widespread touring under the anniversary banner The First Fifty Years. He still performs or records about 100 days annually. But turning 74 next week, with a much younger wife and twin eight-year-old boys at his home in Atlanta, he expects his Australian concerts will be his last here.
"This is probably gonna be my last international tour," he says. It's because his family can't be with him. "So I think when I come back … that's gonna be it. I'm gonna stay home then.
"I'll continue to tour the States. I'd just like to be able to get home [more] so I can spend what I think is quality time with the boys … I really wanna be there for 'em instead of being gone all the time."
Rogers has said his one regret is the toll his pursuit of success had on his relationships. But "I don't want to go back and rehash things that I was honest about and paid the price for. I don't want to pay it again."
Kenny Rogers will also play at the State Theatre tomorrow night, again supported by John Williamson.
If Rogers other performances down under in Australia are anything like tonight's, fans are in for a massive treat from this true music legend, and his new Aussie legend mate.
Australian Tour Dates...
SYDNEY, NSW AUSTRALIA
August 16, 2012 9:00 p.m.
State Theatre
With Special Guest John Williamson
DARWIN, NORTHERN TERRITORY AUSTRALIA
August 18, 2012 9:45 p.m.
Darwin Festival
George Brown Botanic Gardens
With Special Guest Sara Storer
PERTH, AUSTRALIA
August 21, 2012 9:00 p.m.
Riverside Theatre
Perth Convention & Exhibition Centre
With Special Guest Troy Cassar Daley
MELBOURNE, VIC AUSTRALIA
August 23, 2012 9:00 p.m.
Palais Theatre
With Special Guest Troy Cassar Daley
NEWCASTLE, NSW AUSTRALIA
August 24, 2012 8:00 p.m.
Newcastle Entertainment Centre
With Special Guest Lee Kernaghan
GYMPIE, QUEENSLAND AUSTRALIA
August 26, 2012 8:00 p.m.
Gympie Music Muster
ADELAIDE, AUSTRALIA
August 29, 2012 9:00 p.m.
Adelaide Entertainment Centre
With Special Guest Beccy Cole 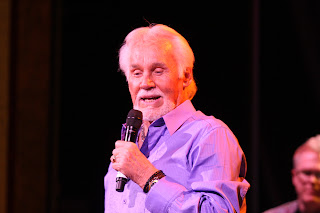