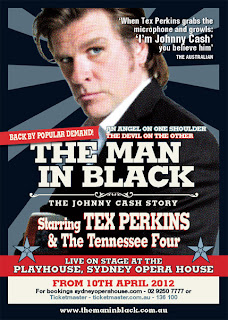 
The great news for Sydney siders is that its coming to the world famous Sydney Opera House this April and will be running for most of the month.


Exploring into Cash's life, love and loss, Tex along with Rachael Tidd and the band – Shannon Bourne, Dave Folley, Steve Hadley and Shane Reilly – will perform 23 of Cash’s songs from Ring of Fire, I Walk the Line and Folsom Prison Blues to Sunday Mornin’ Coming Down, Get Rhythm and A Boy Named Sue.


There's lot of praise being thrown around for Perkin's performance of Cash, and in this case is it truly deserved.


The massive catalogue of Cash work is done justice in a show that covers both the story of Cash's life, death, and the magical songs that brought it all together.


Perkins is a master in being Cash, with his deep gravelly mumble, his darkness and powerful spirit.


He is supported superbly by Rachael Tidd, who plays Cash’s wife and soulmate June Carter. Her voice is equal, if not better than the character she portrays and the special chemistry she shares with Perkins adds even more greatness to the show.


For those old enough to have witnessed the original Johnny Cash, you will be impressed, and for those who haven't, Perkins gives you as close to as perfection as is humanly possible.


This is 'The Man in Black' and Australia is blessed to have Tex delivering it to our Sydney Opera House.


The Man in Black - The Johnny Cash Story


The Helpmann Award winning The Man in Black is back! Tex Perkins leads The Tennessee Four in a celebration of the life and times of one of the most incredible singers, songwriters and entertainers to ever grace the stage.


This is two hours of Cash's magnificent music interwoven with the story of his rise to stardom, his fight for survival and his eventual redemption.  Tex and his band take on Ring of Fire, I Walk the Line, Folsom Prison Blues, Sunday Mornin' Coming Down, Get Rhythm, A Boy Named Sue and other classics in a 2 hour show that also explores his relationships - from hardened prisoners to the beautiful June Carter and lots in between.


With his driving freight-train chords, steel-eyed intensity and a voice as dark as the night, the legendary Johnny Cash revolutionised music. Tex Perkins, one of the most electrifying front men of Australian rock 'n' roll, brings the hard-living country legend to life, delving into the depths of the star's life, love and loss.


'When Tex Perkins, formerly of the Cruel Sea and the Beasts of Bourbon, grabs the microphone and growls: ''I'm Johnny Cash'', you believe him.'  THE AUSTRALIAN


'…Tex is Tex. Captivating and entertaining. And so is the show. It will satisfy hardcore fans of both men. And that's no mean feat.'   HERALD SUN