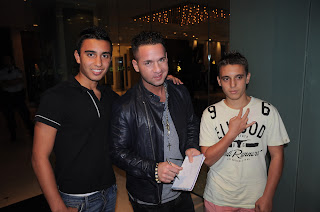 Last night in Sydney, Australia, Jersey Shore's Mike "The Situation" Sorrentino and his brother, greeted Australian fans.
It was approximately midnight when brother of "The Situation", greeted fans at the Shangri-La Hotel. He told fans "Joseph and Antonio" that "Mike was tired and was sleeping, but would be down to meet them in about an hour", and Mike didn't disappoint.
Later than night Mike would head off to Kings Cross nightclub Trademark.
Fans waiting at the Shangri-La Hotel would see a little unscheduled action and excitement before Mike would appear.
A hotel manager seeing that a modest size group of fans, no more than 8, was waiting, told the group that if they didn't leave police were called, and less than ten minutes later not one but three police cars were called to the location. Fans and their parents told the police that they were fans and were just waiting for the opportunity to see and speak to Mike, and the police were fine with that. It was quite surprising that police were called in the first place as its understood that the Jersey Shore star is media friendly, appreciates his fans, and that his media manager was also on location.
For those unfamiliar with the mega popular reality TV program, season 4 of Jersey Shore was the most watched series ever on MTV Australia, with the premiere episode earning highest debut for any show in the channel’s history.
Season 5 saw the housemates back on their home turf of Seaside Heights. That's where the fist-pumping magic all began and a pop culture phenomenon was born.
The show will premiere on MTV Australia on Wednesday, 21 March.
We wish the cast and crew well as the reality TV franchise folks enjoy some time in Sydney.
Australian dates and locations where you might just catch them...
Sydney - Friday March 2nd at Trademark Hotel
Melbourne -- Saturday March 3rd at Eve Bar
Melbourne -- Saturday March 3rd at Love Machine
Gold Coast -- Sunday March 4th at Vanity Nightclub
Websites
Jersey Shore
www.mtv.com/shows/jersey_shore/season_5/series.jhtml
MTV Australia
www.mtv.com.au
MTV Australia - Jersey Shore Season 5
www.mtv.com.au/shows/jersey-shore-5
Posted by Eva Rinaldi at Saturday, March 03, 2012