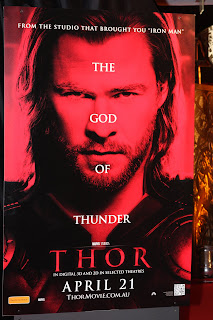 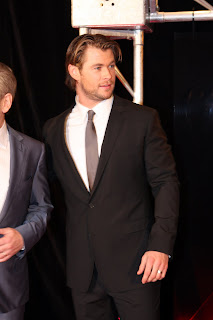 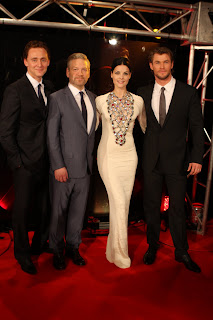 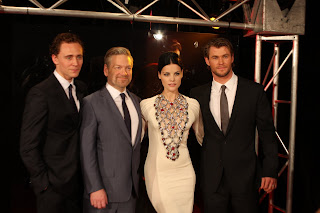 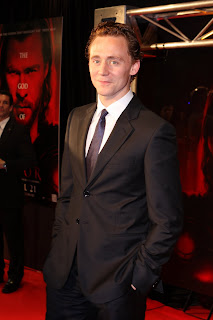 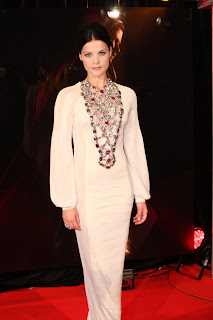 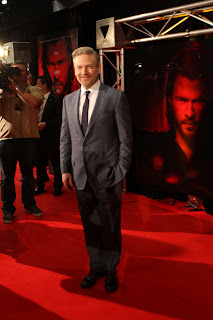 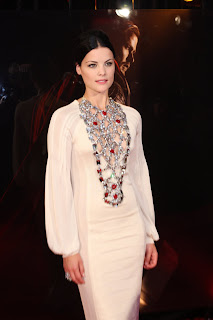 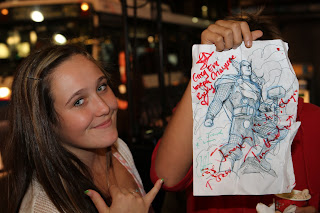 Chris Hemsworth Autograph
Thor mania, a big part of the Marvel Universe, smashed its way into the George St, Sydney Event Cinema tonight in front of hundreds of Marvel-Maniac fans and dozens of just as maniacal Australian photographers and paps.
Aussiewood - Hollywood leading man, Aussie born and bred hunk-0-mania Chris Hemsworth is ready to rock, roll, and get all caught up in Stan Lee's Marvel Universe, with Thor, which premiered in Sydney just minutes ago.
Thor is a killer movie, the type of blockbuster you have grown to love (or hate) based on the Marvel Comics character, who thanks to the flick push is starting to return to his former fame.
Hemsworth's mug is everywhere....billboards, soon TV, videogames, lunch boxes and god knows where else. The Aussie lad is understood to be in for a bush tucker bag of pay days, thanks to the revamped remuneration structure for Marvel Comics themed motion pictures.
Hemsworth was prepared to go on record with News Limited and wires with "It's been a slow burn for a year-and-a-half, gathering awareness, but now it's starting to really blow up with billboards and posters and more and more people seeing the trailer. It's nuts and it's exciting. I feel like a little kid, able to play a superhero, and that it's being received so well is exciting. It's incredibly surreal."
When Human Media asked him about the most enjoyable part of doing the film he said "Oh god, just all of it. It was all so awesome."
Movie insiders leaked that a Thor sequel is also about to go into production.
Thor is a key member of the Marvel Universe, at least these days. An insider leaked "Marvel comics living legend Stan Lee was quizzed and consulted on the the future of Thor, and he advised the one who swings the hammer must be a key part of the Marvel Universe future. Lee got his wish."
Thor will also appear in The Avengers, with Hemsworth in store for yet another pay day. Hollywood comeback kid Robert Downey Jr will get another go as as Iron Man, Mark Ruffalo as The Incredible Hulk, and Chris Evans as Captain America. Scarlett Johansson is strongly tipped to be appearing as spy Natasha Romanoff.
Back to Thor, Natalie Portman plays Hemsworth's superhero babe. Living legend Anthony Hopkins from 'Hannibal Lecter' world stars as Thor's dad Odin.
The film is directed by Kenneth Branagh and is getting the push in Australia by Paramount Pictures, rather than Sony, which looked after other Marvel Entertainment flicks such as Spider-Man. Spider-Man 4 is rumored to have got bumped to make way for the Thor release, with Captain America tipped to hit Australia within 6 months, possibly sooner.
"We'd talk about the business and Anthony always said, 'Make sure you're having fun, take it seriously and do the work' - but it is fun," Hemsworth stated.
Working with Portman, who recently won an Oscar for playing a troubled ballerina in Black Swan, was also enlightening.
"Natalie was fantastic, another one who I've been a huge fan of for years, and she's just as wonderful as you'd imagine, and really funny," he says. "I didn't realise she had such a great sense of humour."
To help prepare for playing Thor, the fit bronzed Aussie gained some extra beef, hitting the gym and gained about 10kg of muscle to finally tip the scales at 100kg. Movie special effects of course took care of the rest, so we think.
"I saw a nutritionist who said to think of myself as a caveman, and protein is what I must consume and lots of vegetables and fruit and a very little amount of carbs," he told the wires.
Hemsworth states there were no special effects to add to his look, but we are not totally convinced, but only he knows for sure.
"I can safely say that's all me. Short of going in and digitally copying every frame, colouring it in or something, I don't even know what they could do - they didn't have to change anything."
Hemsworth is warm and likable, especially by showbiz standards and says his three years on Home and Away was the best training an actor could have.
"Home and Away was one of the biggest learning curves for me because you're thrown into the deep end of it all," he says.
A couple of years ago Hemsworth quit Australian TV, headed off to the U.S, and got some cracker roles in films such as Star Trek, The Cabin In The Woods and Red Dawn.
My team and I found the actors and management very helpful and friendly, and from the footage we've seen of the film so far it looks fantastic, and we think its going to be in the 4 stars range, if you just make the allowance that it's a superhero movie.
A special thank you to the good folks at Paramount Pictures for your excellent assistance in helping coordinate things for us tonight, and also Chris Hemsworth and Tom Hiddleston for autographing the Thor picture that my son Joseph brought along this evening. Joseph and some of his mates were overheard to say they would see the film five times as a token of appreciation.
Thor premiered in Sydney tonight and opens on Thursday. As our un-met friend Stan Lee in the U.S says, Excelsior!
Websites
Thor (Marvel Entertainment)
Thor (Marvel Entertainment: Australian website)
Thor Facebook
Paramount Pictures
Event Cinemas
Eva Rinaldi Photography
Eva Rinaldi Flickr
Posted by Eva Rinaldi at Sunday, April 17, 2011