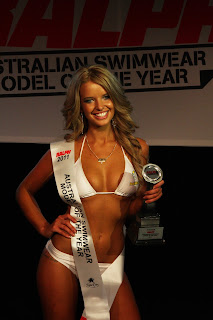 Kahili Blundell
For the third time in the event’s history Star City was the home to the RALPH Australian Swimwear Model of the Year (RALPH ASMY) National Finalists and will host the National Final in the Grand Harbour Ballroom.
Renowned for bringing the biggest names, the best shows and the most spectacular events to the region, Star City’s line up of entertainment is second to none. The 2011 RALPH ASMY National Final promises to be no exception.
Star City was excited about their association with the RALPH ASMY National Final, adding a distinct element of colour and glamour to further diversify the already extensive events calendar.
The contest has been promoted in cities and major towns throughout the months of November, December, January and February in over 200 nights of promotions in almost 40 venues covering all major cities and regional centres throughout all States and Territories in Australia. Each venue ran up to 5 nights of contest.

Kahili Blundell 2011 Winner ... The winner of the title RALPH received over $16,000 in cash and prizes and will appear in the 2011 RALPH Australian Swimwear Model of the Year Calendar, she will feature in the Poster and other promotional material as well as a photographic feature in ZOO MAGAZINE.
Runner up Sina King, Tiffany Baker and Krystal Dawson.