Photography with a homeless man, by Eva Rinaldi 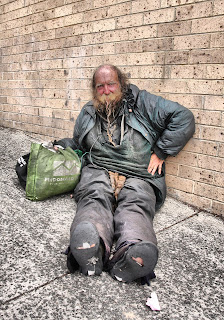 I took these Photographs yesterday hot summer humid afternoon in Sydney. I've always been interested in what other people try to ignore. I begged my friend to stop the car as I looked at people walk past him whispering among themselves.

As I got closer my heart was pumping I was having flashbacks of him chasing me down the street lol. I saw him leaned up against the wall, he wore 2 jackets on that were almost in shreds and his beard was matted that nearly touched the floor.

He wore shoes that looked 30 years old, too small for his feet with holes all over them.

I know you're not supposed to give homeless people money, but I thought it was nice to give him five bucks, I had a hundred dollar note in my wallet which i wasnt prepared to break cause I needed to go to aldi to do some grocery shopping, anyway I found the courage to ask him if i could photograph him while he was sitting up against the wall.

To be honest I even asked my my friend that was waiting for me in the car to keep a look out on me just in case the homeless man is disturbed and begins to chase me down the street.

I finally made conversation and I was really happy to capture him on film and have a chat.

I asked him if there was any place I could leave him the photographs he said I could leave the photos at mission Australia with a woman there called Emi. (i wonder if she exists really exists?

He told me he went through a rough patch and that his home was taken away from him he lost his wife and said people thought he was crazy.

I dont think he was crazy at all alot smelly but not crazy. I beleived him, perhaps he was a alcoholic? he didnt look drunk he had a bottle of cocacola right beside him which nearly rolled down the street, he even made a joke and told me to send cocacola the images.

Except for rare cases, the homeless alcoholic has lost everything he or she once had. The job is usually the first to go, then family then house then every other possession. All of it has been squandered in pursuit of the next drink.

For many homeless alcoholics, this kind of loss is more devastating than they can deal with, and they commit suicide. Those who don't could be labeled "survivors," but that too is not what I'm getting at.

It is so important that we love each other and show jesus through our acts and deeds.

The best way to win a person to christ is showing we care and not be judgmental in their pasts and mistakes. None of us are perfect and we all have fallen plenty of times.

"Keep on Loving each others as brothers and sisters, do not forget to entertain strangers for by so doing some people have entertained angels without knowing it."

God Bless you Terry... Take care, I will be sending your images to Emi at Mission Australia. 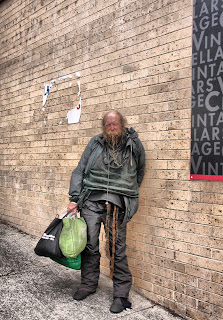