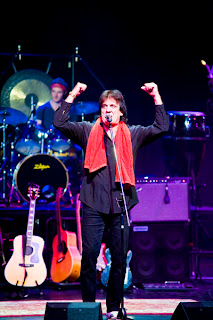 ABOUT THE ROCK SHOW

The Rock Show is a touring theatre show starring Jon English and a cast of eight young multi-instrumentalists playing 60's and 70's rock music. It features the music of The Beatles, The Rolling Stones, The Who, AC/DC, Led Zeppelin, Jimi Hendrix, The Kinks, Elton John, David Bowie, Pink Floyd, Queen, many more, and of course Jon English. Mixing theatre and rock and covering two decades of amazing music into two and a half hours, the show has played in many theatres in Australia to sell-out houses. Don't miss it!
The Rock Show was born in 2008 when director Stuart Smith changed his mind about the pantomime he was asked to write for the opening of the Shoalhaven Entertainment Centre in Nowra.
Whilst directing a production of Jon English's rock opera Paris, Stuart became inspired by two musicians from the show's band playing classic rock songs outside of the theatre on cello and guitar. One of these was Isaac Hayward, who formed a bond with Stuart, and together they called upon their multi-skilled friends to re-discover 60’s and 70’s rock.
The cast went into rehearsals, preparing for the season in Nowra, but there remained one thing missing – the perfect era-conscious rock narrator. Stuart, having just worked with Australian rock legend Jon English, brought him into the fold to contribute to the humour, history, theatrics, and the hardest task of all – what to cut.
After standing ovations every night and an overwhelming response at the opening of the Shoalhaven Entertainment Centre, Jon led the cast on a nation-wide tour of The Rock Show. The show is constantly evolving, and always trying to find new and exciting ways of cramming as many great songs in as possible.
For those who have seen the show, we hope you enjoyed it.


For those booking to come back, bring your friends.


And if it's your first time, bring your knickers to throw and a lighter to hold up and get ready to Rock!
For videos of the show, check out The Rock Show's YouTube channel! 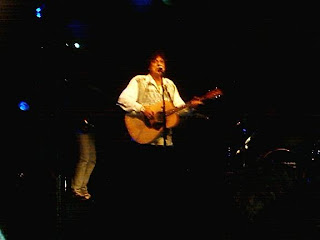 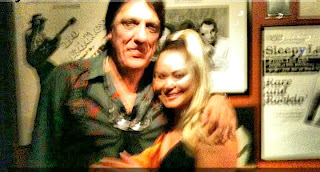 Jon English and Eva Rinaldi
It was a honour to meet Jon English at the basement, it was Jack Thompsons 70th Birthday party. Sorry about the blury photo the lighting was really bad.
Jon English is a Profilic songwriter, experienced screen composer and a populular actor with wide community recognition and critical public accliam, Jon English is undoubtedly one of Australia's most successful loved and enduring recording and performing artists.
http://www.jonenglish.com.au/
http://www.therockshow.com.au/
Posted by Eva Rinaldi at Thursday, January 20, 2011