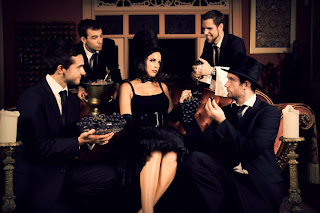 I enjoyed a Interview and chatted with gorgeous Novac Bull from Boom! Bap! Pow! - about their upcoming album release, and the first time East Coast Tour, Playing shows with Royal Crown Revue.


1.      You're name is so interesting and unique. Tell us about how that came about?


The name is of Serbian/Slavic origin. However, my Mother was not as interested in it's origin as to who's name it was - I was named after Kim Novak the actress from the 70's. Mum changed the 'K' to a 'C' so as far as we know, i'm the only Novac with a C! Novac means 'new beginnings'


2.      When and where did you get your break in the entertainment industry?

I don't know if you'd call it a 'break', i think we have a long way to go, but in terms of getting our name out there supporting the big guns - It all came about with the Mo Town show, when we supported The Temptations, Fourtops, Martha Reeves and the Supremes last year in Feb. We look up to the Mo Town musicians, and are inspired and influenced by their music/songwriting.
3.      When, how and where did your group Boom! Bap! Pow! come about?


I think Clint and Paul had the name somewhere at the back of their heads. It was one of those names that was so good that you just had to start a band to go along with it, picture comic strip “Pow”  feels like the 50’s, 60s or Batman.

4.      We researched that your music influences include Del Shannon? How accurate is that, and who else would you say you have been influenced by?


Etta James is a huge influence for me personally - it’s her intensity as a vocalist, her dynamics. She can be sweet as sugar one second then she gets her 'growl' on  and manages to send shivers up your spine every time. Modern day influences include CW Stoneking, Sia, Spoon, Justin Townes Earle.

RTRfm 92.1, (Perth Independent)/ Peter Barr, Xpress and Drum Media of course.
7.      What do you like to do when you're not doing music? (What is your occupation aside from Music??)

Work with children with Special Needs, Clinic Assistant for Chinese Medicine Practicioner and sporadically in retail at a friend's vintage clothing and curios store Winifred and Bance.
8.      What's your current focus, and where are you playing next?

Concentrating on what's in front of us right now, that being the tour. Doing the best we possibly can and sharing our music with the people of Brisbane, Sydney, Melbourne and hopefully...eventually..beyond!
Playing a lot of local shows when we get home and totally psyched to be playing The Laneway Festival. Thanks to Triple J Unearthed.
9.      What would you say is the biggest misconception about you or the band?

That we walk, talk, sleep, eat and live Doo Wop!
10.  AC/DC famously wrote a song about how tough the music industry can be. 'It's A Long Way To The Top If You Want To Rock N Roll'.  How relevant would you and the group say that song was to your music industry experience?

I love that song! It’s very relevant actually, and speaks volumes about the industry, you’ve got to work hard. Far be it for me to complain though, i love the lifestyle and realise that we are so very blessed to be able to do what we do. The ride is crazy, intense, colourful and super fun. I think the ideal of 'getting to the top' is fairly outdated though - very 80's!

I think living in the country - out bush,  with my partner writing songs in a studio, living off the land with a couple of kids, chickens, the cats and a kick ass veggie patch! And we'd all be living in splendid harmony. Haha!
Websites